Review We Meant Well, How I Helped Lose the Battle for the Hearts and Minds of the Iraqi People

Van Buren, Peter, We Meant Well, How I Helped Lose the Battle for the Hearts and Minds of the Iraqi People, New York: Metropolitan Books, 2011 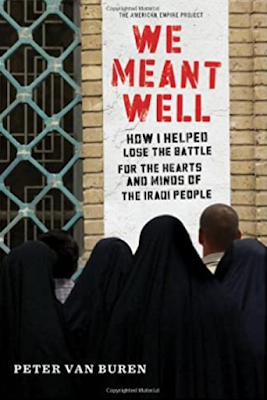 Martin van Buren was a State Department official who was sent to Iraq for one year to head an embedded Provincial Reconstruction Team (ePRT) in 2009. His book We Meant Well, How I Helped Lose the Battle for the Hearts and Minds of the Iraqi People reads like a travel journal. The highlight of the book is his description of how ridiculous the U.S. rebuilding effort was. That’s overshadowed by van Buren’s cynicism and immaturity which dominates his writing.

The U.S. reconstruction effort in Iraq was the largest in history. However, it was never coordinated, there was a staff shortage, metrics were never used to evaluate the work and was mostly driven by Americans attempting to impose projects on the Iraqis whether they wanted them or not. Van Buren provides multiple examples of this. One was a waste water treatment plant that was supposed to be refurbished by the Belgian and Japanese governments. They never sent any people to the site and hired Iraqi contractors to do the work which were mostly fronts for Turkish companies. The plant only got 2-3 hours a day of electricity which was hardly enough to operate plus all the new equipment that was supposed to be installed required a new staff to be hired and trained but there was no budget for that. Another time the U.S. army came up with a plan to build milk distribution centers around Baghdad that were supposed to boost production and sales. Two centers were built and the Americans found sheikhs to run them but they not only had no idea what to do but didn’t have any money to run them either. The centers were never used. Even when van Buren’s ePRT had a success such as funding a women’s center that provided medical and legal advice it wasn’t a priority for the U.S. Embassy so the money was cut off after 6 months. These were all typical of the work that van Buren and others did in Iraq. They ignored the experience of NGOs and aid groups that tried to work with populations and find out what their needs were and attempted to help them with those. Instead, the U.S. just did what it wanted and wasted millions in the process. Not only that but there was no overall plan, accountability for what happened in the past or attempts to cooperate with other reconstruction teams and the military. Each group just did what it wanted isolated from everything else.

The problem with We Meant Well was van Buren’s writing style and his attitude. For one he said that the U.S. was working with Iraqi thugs, thieves, sheikhs and corrupt government officials. That meant he denigrated almost all the Iraqis he described in his book. He was supposed to be helping people but he never wanted to go to Iraq in the first place and didn’t like most of those he met. This deep cynicism made the author come off as a jerk most of the time.

His comments about life living in an army base were no better. He wrote about how he thought about sex all the time and fantasized about most of the American women he met. There was little alcohol available so when they got some it was a celebration because they got drunk. One of his team members asked an army officer out which was spread throughout the Internet and deeply humiliated the man. All these parts are like reading about life in a college dorm. His sense of humor and topics are juvenile. We Meant Well would’ve been a hundred times better if the reader didn’t have to read about what it was like to go the bathroom or take a shower on a military facility.

One might be tempted to read van Buren’s book for his account of what a disaster rebuilding Iraq was but there are other books that cover the same topic without the extras that the author throws in. Looking down at Iraqis and sounding like a 20 year old boy doesn’t endear one to the work.