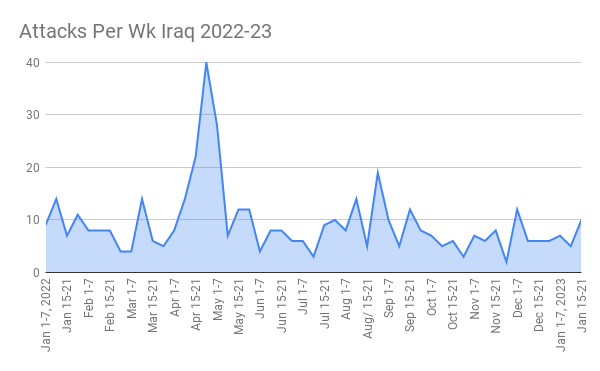 The number of incidents by the Islamic State doubled during the third week of January compared to the last week. There was also another attack by a pro-Iran group something that has become rare in Iraq since last fall.

There were a total of 11 security incidents reported in Iraq from January 15-21. That compared to 6 the second week of January and 7 the 1st week.

In Yusifiya in southern Baghdad an IED hit a convoy working for the United States. This was the second incident by a pro-Iran group in January. These groups are very quiet right now because they are arguing over positions in the new government.

That was double the number of incidents the week before. Incidents had been in single digits for the previous five weeks.

They left 2 dead and 7 wounded. 2 members of the Iraqi Security Forces (ISF) were killed and 4 more were injured along with 3 civilians. There were 4 casualties in Diyala, 2 in Kirkuk and 3 in Ninewa.

Kidnappings were the major event of the week. 3 people were taken in Diyala 6 more in Salahaddin in two different incidents, and another 2 in southern Sulaymaniya. These were likely done for money as abducting people remains a major means of financing for the insurgency.

In Diyala 2 police were shot and killed and an IED wounded 2 soldiers. In Kirkuk 2 more police were killed in an attack and a suicide bomber was caught in a security sweep. There were two IEDs in Ninewa. All but the suicide bomber were routine IS incidents. They were aimed at keeping the security forces out of IS areas. The Iraqi forces said the suicide bomber was on a mission when he was ambushed and killed. A similar event occurred at the start of the month. Suicide bombings are a rare even in Iraq currently. It’s not clear whether these were attempts by the militants to carry out a mass casualty bombing or whether they were simply fighters moving from one area to another who were caught by the government.

NINA, "A child injured when an explosive device left by ISIS exploded, west of Mosul," 1/16/23

- "Two soldiers were injured when an explosive device exploded in Diyala," 1/21/23

- "A terrorist attack kills a police officer and affiliate in Kirkuk," 1/18/23