In May 2017, there was a huge controversy in Iraq as photographer Ali Arkady released three articles documenting abuses by the Emergency Response Division (ERD) of Iraq’s Interior Ministry during the Mosul campaign. Arkady was roundly attacked by the ERD, the Iraqi forces, and on social media by the public for his stories. Three months later, it turned out Arkady was right, and the ERD unit he followed did do wrong.


In August 2017, Prime Minister Haidar Abadi’s office acknowledged that an ERD unit did commit crimes during the Mosul campaign. An investigative committee looked into the incidents originally covered in Der Spiegel by Ali Arkady, and found that his reporting was sound. This happened three months after the original article with very little fanfare compared to when the story originally hit. 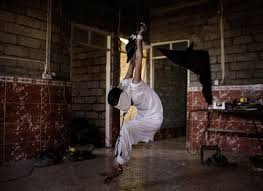 Ali Arkady’s coverage of the ERD unit appeared in three international publications in May 2017. First, he wrote a piece for Der Spiegel. Then ABC News and the Toronto Star covered Arkady. All three articles followed Arkady as he embedded with an ERD unit he originally met during the Battle of Fallujah in 2016. The Interior Ministry forces went into action in October 2016 south of Mosul, and Arkady followed them until December. When Arkady first met the forces, they were already talking about killing people in Anbar. During the Mosul campaign, they tortured several men they captured, and later claimed they killed some of them. For instance, the ERD picked up two young men who were captured and then released by the Golden Division. The two were tortured, and then the ERD said they shot them the next day. On officer told Arkady he was going to rape a woman while her husband was being beat. That didn’t happen as the woman was on her period. After Arkady left the unit, they continued to send him videos of their abuses, including them executing a handcuffed man. Arkady later gave his photos and videos to ABC News, which wrote about them as well, followed by the Star. The Iraqi Security Forces (ISF) are rather notorious for their abuse, torture and extra judicial killings, which have been going on since 2003. There are yearly human rights reports about their bad behavior. It should have been no surprise then when Arkady documented such actions by the ERD. Instead it stoked a huge controversy.

Initially the ISF said it would investigate the matter, but it quickly turned to refuting and then attacking Arkady. The day after Der Spiegel published the report, the Interior Ministry said it would look into it. The ERD not only denied the story, but claimed Arkady was making it all up. It stated that the footage was all made by the insurgents to undermine the reputation of the Iraqi forces. It released two videos claiming to counter Arkady. The unit tracked down some of the people they had tortured, stuck a camera in their face and asked if they had been abused. Of course, they all said no. The woman in Arkady’s piece was also interviewed, and she said she was not raped. By June, the Joint Operations Command claimed that Arkady fabricated his report to win asylum, and get out of Iraq. It went on to say that Arkady tortured people, and that he was complicit with the ERD if they committed any abuses because he was there watching it happen. Not only were the Operations Command’s charges ridiculous, but the ERD’s video did not refute Arkady. Arkady for example, did not see any of the prisoners executed. It was the ERD who said they killed them. There was no rape in the Der Spiegel article either, and as one of Arkady’s videos showed, an officer walked into the woman’s room, shut the door, then walked out saying she was menstruating. Finally, expecting people who had been tortured to admit that they were to the ones who were behind the acts with a camera in their face stretches all credibility.

Despite the ERD’s rebuttal, members of the unit actually bragged about what they’d done. Captain Omar Nazar told ABC that not only did he not dispute any of Arkady’s pictures or videos, but that what his men did was necessary because all the detainees were Islamic State members. The Captain for example, was video tapped punching a man repeatedly, while telling him to recite his allegiance to IS. He was even quoted as saying he didn’t take prisoners, meaning his unit might have killed some of the detainees as well. He added that if any abuse occurred he was proud of it. Arkady would later say that Nazar threatened his family via Facebook. That prompted Arkady to try to move his family out of Iraq. Captain Nazar’s virtual confession was only covered in the western press however, so the ERD’s videos and refutations were all most Iraqis heard.

Arkady fostered two disparate responses. Internationally, his reporting of abuses by the Iraqi forces (ISF) got widespread coverage and led to condemnations of the ERD’s actions. Within Iraq however, he was the one being attacked as the videos, the denials, etc. made by the ERD went viral on social media. The fact that few if any appeared to have read any of Arkady’s work made it easier for them to accept the ISF’s version. Because this occurred in the middle of a vicious war with the Islamic State, and was reported by the foreign media contributed to a knee jerk, Iraqi nationalist reaction as well. In the end, Baghdad admitted that Arkady was telling the truth. It got so little coverage however that many will still believe that Arkady was a liar who defamed the Interior Ministry’s force.

Whitson, Sarah Leah, “Winning Battles but Losing the War for a United Iraq,” The Star, 5/27/17

Journalists are always the first victims of a conflict.

I would like to raise a point though. The same people as the Toronto Star (a leftwing publication funded by unions at par with The Independent) who blasted the US for bringing democracy to Iraq with the criticism (partly justified) that Iraq is not ready for democracy, and that is something that cannot be imposed on 3rd world nations, are the same people who when confronted with the facts about an authoritarian non-democratic state, such as ISF's torture and rape and execution programs and coverups -- then put up a screaming temper tantrum when these unsavory facts are published -- that come and witness human rights abuses (under the nose of the US forces).

May I ask them, since you have been and are against the democratization of the Middle East, then are you not expecting such abuse of authority which Mosul would be just the tip of the iceberg, to occur on a regular basis with hundreds if not thousands of people killed, raped, and tortured? Do you really think that Saddam's regime was all peace and honey and congeniality?

Sometimes I shake my head when I see such irony. Something which the left is immune to. Irony never entered their consciousness.

You take an irrelevant bit of a story and try to build a diatribe out of it. This is made worse by the fact that you don't seem to know much if anything about Iraq.

It is a fact that the left (and isolationist rightwingers) have been against intervention and regime change, and have caused the pullout of American troops and the rise of ISIS. Will they take responsibility when ISF tortures prisoners? They should.

It is hypocritical that Toronto Star and Spiegel, dominated by the cultural left are complaining about torture in Iraq, when they have been against democratization. If you don't see the irony, then you are probably in their camp?

I am not pretending that I know a lot about Iraq. Why is this ad hom relevant?

If you want to be a blowhard and listen to your own voice this is not the forum for you.

And if you want to check the Bush admin policy up to the Surge was to withdraw from Iraq as quickly as possible. The leading advocates for this policy were Defense Secretary Rumsfeld, CENTCOM commander Gen Abizaid and US commander in Iraq Gen Casey.

I am listening to your voice. Are you saying that only certain Iraqi topics can be discussed here - those that you choose? I also hear some ad hom.

Bush's policy up to the Surge was based on a mistaken belief that the Iraqis will be able to manage their own affairs and with the demise of Saddam Hussein, civil society will flourish in Iraq. That led to the administration's plan to withdraw (which was always parcel to the Iraq invasion plan), cut costs, and mollify the critics of the Iraqi invasion. It was a sane policy, except that the on the ground realities turned out to be very different. So you have taken this out of context.

If you may recall, one of the central platforms of Obama during the 2008 election year was to perform a quick exit strategy on Iraq and Afghanistan, and in opposition to the continuation of Bush's policy. This policy eventually led to the formation of ISIS, in addition to other factors such as Maleki's rule.

My point is a very rational one. That those who campaigned for a premature US exit strategy, and those who were ideologically against the democratization of Iraq - are they willing to take responsibility for atrocities that are occurring due to the authoritarian nature of the Iraqi state? They can't have it both ways. It is just fine for Toronto Star to report human rights abuses in Iraq. But will they atone to their anti-democratization editorials and opinion making, and attacks on US policy makers trying to make heads out of the Iraqi debacle? This is a very serious issue. But I can understand if you don't feel that it should be discussed.

If you want to go on about your partisan politics than I don't have time for you. You are not talking about Iraq, but yourself and your own hang ups.