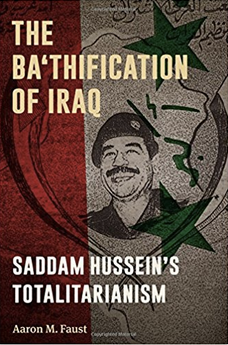 The Ba’thification of Iraq, Saddam Hussein’s Totalitarianism starts off with a dramatic story of a bicycle repairman in Wasit province who shot his son for deserting the army during the Iran-Iraq War. The man wrote to the Baath office for deserters asking to be pardoned for his crime. The secretary of the office passed his request all the way to Saddam Hussein who not only amnestied him, but gave him a commendation and entered his account into the official records of the war. The point of Aaron Faust’s book is to explain why people like this lowly laborer would kill his own child for a dictatorship like the one in Iraq. Was it because people loved Saddam as thousands of letters and speeches proclaimed each year, were they loyal to the regime, or was it because they were terrified into submission as writers such as Kanan Makiya wrote about? What Faust argues is that the Baath Party and Saddam created an all encompassing system, which offered rewards and punishments and attempted to control every facet of Iraqi life from marriage to where people lived to their education to their jobs and future. Under such a system the vast majority had to comply to ensure their livelihood and that of their families.


The Ba’thification of Iraq is one of a series of books based upon the extensive Baathist records that were seized after the 2003 invasion of Iraq and taken to the United States for safe keeping. The documents cover the period from 1979-2003 and are housed at the Iraq Memory Foundation at Stanford University in California. There is another collection at the National Defense University in Washington D.C. These papers document the day to day activities of the Baath Party to control the Iraqi populace. Faust found that Baathist Iraq operated much like other totalitarian regimes such as Stalinist Russia, Hitler’s Germany and Maoist China.

What sets a totalitarian government apart from an authoritarian one is that doesn’t just rely upon violence, but it also offers plenty of rewards and wants the public to love and support the authorities. It claims it serves the masses, while attempting to co-opt and destroy any element that might oppose it. It wants to politicize every element of society so there is nothing left but the state, and in Iraq’s case that was personified in Saddam Hussein. Those that did not conform could lose their jobs and their lives. This violence could be indiscriminate since there were no checks upon the government, but force alone could not explain the Iraqi regime or any of the other totalitarian ones. Instead, Iraq created a system meant to indoctrinate every Iraqi from the day they were born until they died. They were taught that the Baath Party stood for a strong Iraq, that it encompassed Islam because it stood for faith and belief, that the public should sacrifice themselves to the state, and if they did they could gain benefits like stipends, pensions, access to college, public jobs, etc. Rather than an all repressive system, Iraq used a carrot and stick approach to make sure the public conformed. This was not absolute as there was always dissent and opposition, but the vast majority went along with the system because that’s what they knew and had to live under. Other books that have gone through the Baath files such as Joseph Sassoon’s Saddam Hussein’s Ba’th Party, Inside an Authoritarian Regime have come to the same conclusion. The difference is that Faust argues that this led to a totalitarian system rather than an authoritarian one.