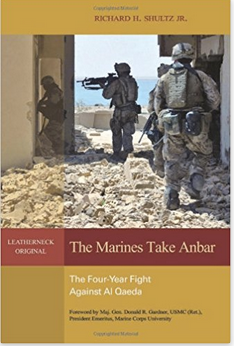 The Marines Take Anbar is a good read on the struggles the Marine Corps went through in Anbar from 2004-2008, but it is not without faults. The book starts with the Marines first several years in Iraq where they had a hard time finding the right tactics, doctrine, and manpower to deal with Anbar. It wasn’t until 2006 that the Corps was able to turn things around by embracing a strategy focused upon protecting the population. That coincided with some tribes around Ramadi turning against Al Qaeda in Iraq, which became known as the Anbar Awakening. That completely changed the security dynamics. The book argues this transformation was due to the Marines’ ability to learn and adapt, which is not always an easy thing to do with a large organization. The major drawback with the book is the linear history style Shultz employs. That means he starts off with the Marines losing and then portrays their experience as a natural positive progression towards victory. The fight for Anbar did not follow such a straight line, and there were several setbacks, which the book underplays.


It took several years for the Marines to figure out Anbar. They were first deployed to southern Iraq in 2003 in a mostly benign environment. The next year they were sent to Anbar thinking that it would be much the same experience. They quickly found out that there was a budding insurgency. There was also a huge intelligence gap as neither the Central Intelligence Agency nor the Defense Intelligence Agency provided the Marines with anything substantive on what Anbar was like. The ensuing two battles for Fallujah were major setbacks because it took months to rebuild the city and undermined their original plans. In 2005, the Corps wanted to carry out a comprehensive counterinsurgency campaign, but the lack of troops meant that they could clear an area but never hold it allowing the insurgents to move back and forth across the province re-appearing after the Marines left. The turning point finally came in 2006 when the Marines along with a unit from the Army’s 1st Armored Division decided to confront the militants in Ramadi in the center of the province and Qaim in the west by deploying in the middle of the cities working along with the Iraqi forces and protecting the civilians. Around the same time, several tribes in the Ramadi district decided to work with the Americans against Al Qaeda in Iraq (AQI). By the middle of 2007 AQI was reduced to terrorism having been largely expelled from most areas of the province. This is the failure to success story that has become famous in U.S. military histories of the Iraq War. It showed how the Marines were able to learn for their failures, and come up with a new and winning strategy. That came before the Surge, and set the stage for the turn around in the conflict that happened the following year.

The problem with this history was that it was not such a straight path to victory, but that was largely omitted from the book. There are several examples. For one, Shultz mentions the Albu Mahal tribe in western Anbar reaching out to the Americans and forming the Desert Protectors by the end of 2004. The Marines set up a base in Qaim to support this effort, and that’s the last word on the matter. What happened was the Albu Mahal was smashed by Al Qaeda in Iraq because the Americans did not support them enough. In another instance, Shultz mentions that in 2007 when Marine forces rotated back into Fallujah they found problems there. That led to Operation Alljah where the Marines used the tactics learned from Ramadi to secure the city. There was no mention on how Fallujah fell apart nor how the Americans were able to turn things around. What happened was the previous unit had withdrawn to its bases and tried to turn over security to the Iraqis who were not ready and the militants were able to seize the initiative and almost took over the city once again. The Marines did use the Ramadi tactics and were helped by reaching out to the tribes in the region. The lack of counterinsurgency methods that led to this setback were not mentioned, and there was nothing on the role of the sheikhs either. The book also often employs a simplistic view of the Anbar tribes. The author wrote that if the militants killed a sheikh the whole tribe would want payback, and that helped undermine the insurgency. Things were not so simple. Most of the major tribal leaders had fled the country due to the violence, leaving behind minor ones with varying degrees of authority. That meant assassinating one did not mean an instant blood feud as some were not that important, and tribes were multi faceted groups with some internally split between helping and fighting Al Qaeda in Iraq.

The Marines Take Anbar is still a worthwhile read. It provides plenty of detail on how Anbar went from a lost cause to the first major area of Iraq where the tables were turned on AQI. It cannot be considered a comprehensive history of those events however, as it missies many things.