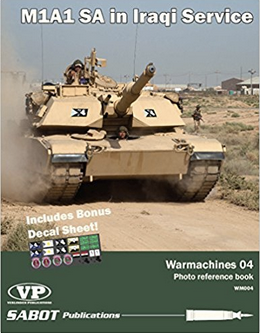 Iraq’s 2014-17 war against the Islamic State gained international attention. It was inevitable that this conflict would raise interest in Iraq’s military as well. That explains the publication of SABOT’s M1A1 in Iraqi Service. The book is for modelers and tank aficionados, and consists of 65 pages of color photos and illustrations of M1A1 Abrams tanks of Iraq’s 9th Division and the Special Division Tank Regiment, although there appears to be one photo of an Abrams with the Hashd al-Shaabi because the unit insignia have been removed, and there are large Shiite flags flying from it.


The book is broken up into four sections. The first are pictures of the 9th Division in training with American personnel and contractors from General Dynamics that build the vehicles, along with 2 photos of first tanks arriving in Basra from the U.S. in 2010. Next are color drawings of Abrams highlighting the markings and paint schemes. The first two are of a vehicle with the Special Division Tank Regiment which protects the Green Zone in Baghdad. After that are close up photographs of the markings of the different regiments within the 9th Division and the Special Division Tank Regiment. The final section shows battle damage and wear and tear to various tanks along with what looks like an experiment at welding a metal screen to the front a turret to protect against rocket propelled grenades. Again, the book is aimed at modelers, so showing the bullet marks, dents, etc. caused from combat are what they are looking for when they paint and weather their vehicles, and there is also a decal set included if one wanted to build an Iraqi Abrams model. 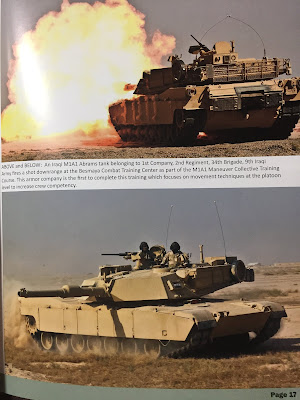 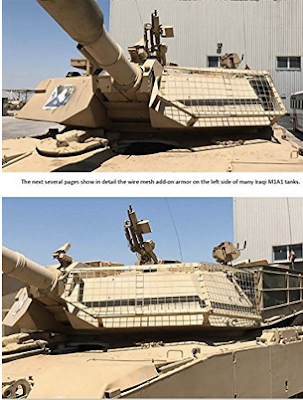 Besides the captions there is only a short introduction that explains how Iraq bought 140 refurbished Abrams tanks from the U.S. from 2010-2012, and that more than 2/3 of them were destroyed or damaged during the war leading Iraq to buy 175 more tanks.

Even if you’re not a modeler, people who are armor enthusiasts or fans of the Iraqi military will like this book. One gapping omission however is the lack of combat photos. There are only three pictures of tanks out in the field including one knocked out. Getting ahold of pictures of tanks in the war would have been very interesting. Still, this is the only book on current Iraqi armor and should be appreciated for that.