Review from storm to Freedom, America’s Long War with Iraq 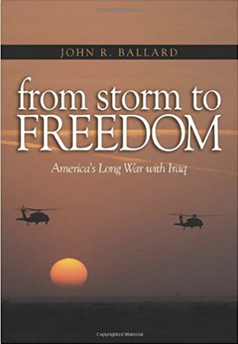 from storm to Freedom, America’s Long War with Iraq by John Ballard attempts to take the long view of the conflict between the United States and Iraq starting with the Gulf War through the sanctions to the 2003 invasion and Iraq War. This seems a natural history as the Gulf War was when Washington first came into conflict with Baghdad, and Saddam Hussein remaining in power afterward set the stage for the following decades. The main drawback is that Ballard is a military historian so the big political issues such as whether the 2003 war was justified and its impact are never adequately dealt with.


The concept of from storm to Freedom is a sound one, and the book covers all the major events from 1990 to 2010. Some of the better points are that Ballard found that the U.S. and Iraq saw their confrontations in completely different ways, which led to missed opportunities. For example, the United Nations sanctions and the deployment of troops to Saudi Arabia in 1990 after the Kuwait invasion had no real effect upon Saddam. He seized Kuwait for financial reasons, so the U.N. and American actions did not deter him. On the other hand, President Bush quickly decided that he would use force to expel the Iraqis. Together that automatically meant there were no other alternatives but war. Likewise, Washington kept the sanctions on Baghdad for the next 12 years hoping to punish Saddam and force him from office, but all it did was devastate the population and economy. In fact, they solidified his hold on the country, the opposite of what the U.S. was looking for. The Bush and Clinton administrations didn’t think they had any other options. One could say that given this history and the events that occurred during the later 2003 Iraq war showed that the disputes and conflicts between the two countries were based upon a series of misperceptions and mistaken policies.

The major drawback is that Ballard is more focused upon the military matters rather than their larger implications however. The author never adequately explains why President Bush decided to go to war, nor what it meant for U.S. policy and its standing in the region and world. He mentions that Iraq was on the mind of the White House early on, but there was no agreed upon strategy. Then 9/11 happened and Iraq moved to the forefront of many leading administration figures including the president. The U.S. was now more willing to use force and that led to the invasion. That’s largely all Ballard gives on the matter. The chapter on the Coalition Provisional Authority is called “The Lost Year” but again there is no analysis of how all the bad decisions made and the growing insurgency impacted the U.S. or the region. The author then goes through the familiar story of how the insurgency grew, the Americans had no strategy, and then they finally figured things out with the Surge, and transitioned to Iraqi control as the Obama administration came into office and withdrew most U.S. troops. The conclusion is especially frustrating because Ballard might have dealt with politics, and hints that there was no real decision making process in the Bush White House and the U.S. lost respect, but instead goes into how the Americans were better able to plan military operations from the 1990s to the 2000s, and how it integrated its forces, and the armed forces showed adaptability after its early failures. This was a really missed opportunity to show how the misconceptions between Iraq and the U.S led to two decades of bad policy and tons of suffering for the Iraqi people. Ballard just wasn't up to that task.