April 2018 saw a decided change in security. From October 2017 to March 2018 the number of incidents remained relatively stable. Then in April they suddenly dropped. Despite that the types of attacks the Islamic State carried out showed that the group had made a shift from the hit and run tactics it carried out in previous months, and was operating more openly and challenging the government more directly.

April was a change from the previous six months. From October to March there were an average of 8-9 incidents per day. In April that dropped to just 6.8. That marked a new all-time low in incidents since 2003.

Violence was down in almost every area of Iraq. From January to March incidents went up in Anbar from 0.3 to 0.8 per day before dropping to 0.5 in April. There was a similar build up in Baghdad from December when there was an average of 2.1 incidents per day, reaching 3 per day from January to February before going down to 2.2 in March and 1.1 by April. Attacks in Diyala have been fluctuating for months now. Incidents reached a nadir of 0.6 per day in October then went up to 1.8 in January, dipping to 1.0 in February, up to 1.8 in March, and then going down again to 1.4 in April. Kirkuk saw a steady rise from 0.8 incidents in September to a high point of 1.7 per day in February, and then 1.5 in March, and 1.2 in April. There has been a straight dive in Ninewa from 2.9 in August down to 0.8 in April. Finally, in Salahaddin attacks have fluctuated up and down from December to April. 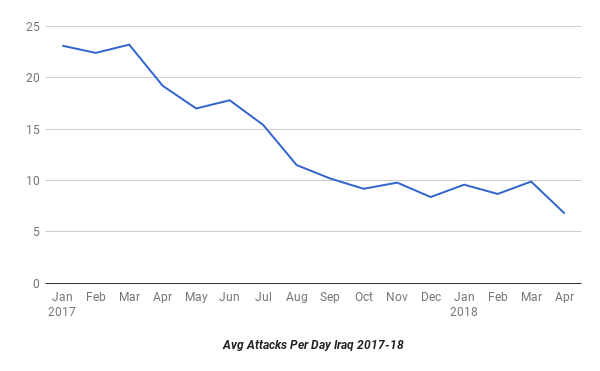 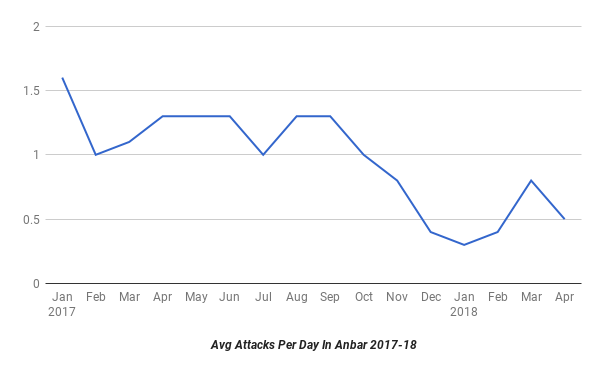 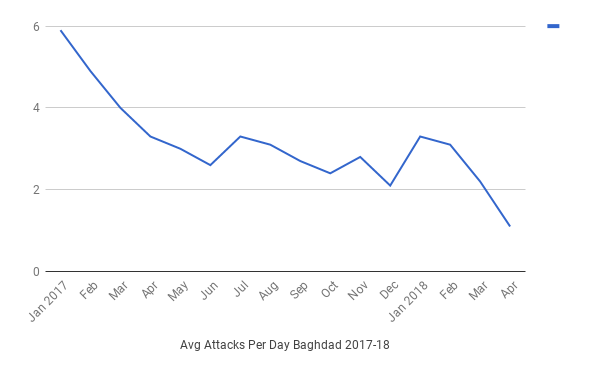 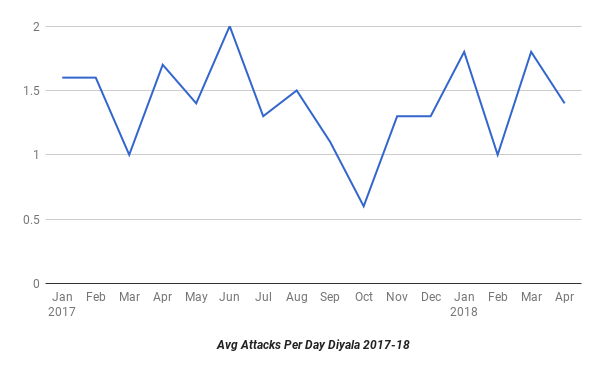 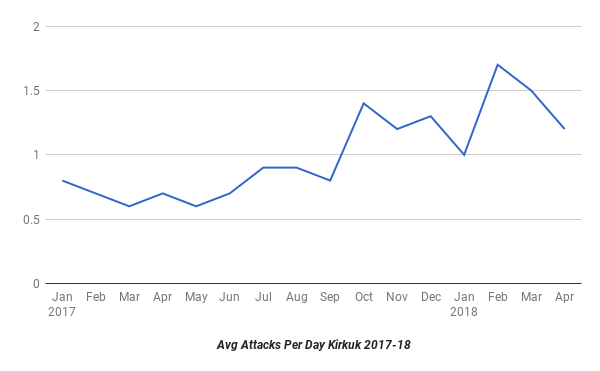 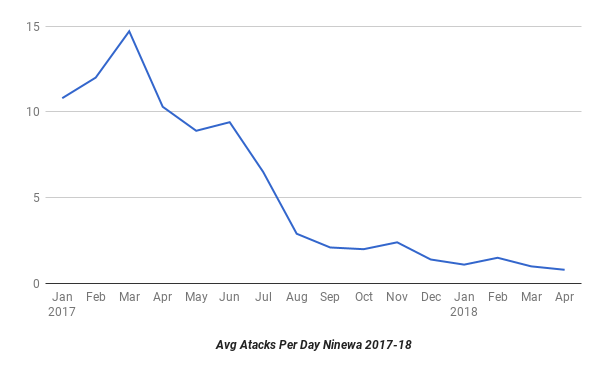 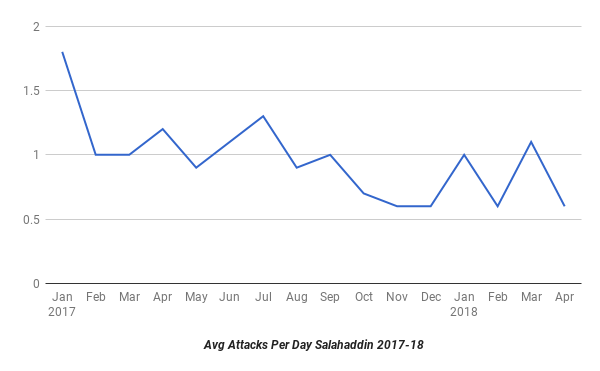 Those incidents led to 486 dead and 236 wounded. 8 Hashd al-Shaabi, 50 Kurdistan Workers Party (PKK) members, 67 from the Iraqi Security Forces (ISF), 91 Turkish Soldiers, and 270 civilians lost their lives. 17 Turkish Soldiers, 18 Hashd, 43 ISF, and 158 civilians were also injured. There were 246 bodies found in mass graves leaving 240 violent deaths during the month. Ninewa was where most of those people were discovered, which was why it had the most deaths with 261.

Even with the decided drop in overall attacks IS has shifted the types of operations it is launching. First, the insurgents are targeting the upcoming elections. In Anbar for instance, the headquarters of the Solution List was hit by two suicide bombers. A candidate from Muqtada al-Sadr’s list escaped an IED in Baghdad. A Turkmen politician survived a car bombing in Kirkuk city one week, only to have a grenade thrown at him the next week. The New Generation Party office in the city were also shot at. Second, there were continued ambushes, fake checkpoints and shootouts with militants in Diyala, Kirkuk, and Salahaddin. In the later, a Hashd training center was attacked, and a police station was hit by a suicide bomber. Third, IS is attempting to regain control of rural areas in central Iraq. In Kirkuk, IS went into three villages and burned houses, while attacking five others. Starting in October, IS made a tactical withdrawal from the battlefield. It hardy put up a fight as the last segments of Iraqi territory were freed. Afterward, there were only hit and run attacks, although there was a decided pick up in terrorism in Baghdad. Now the group is back to its old tactics. It is rebuilding in the rural, desert and mountain areas of Anbar, Diyala, Kirkuk, and Salahaddin. It is also no longer holding back on direct confrontations with the security forces, and there have been reports of insurgents walking around in the day showing no fear of the government in small towns. Those are all reasons why the drop in incidents in April needs to be seen in a larger context of what the Islamic State was trying to do in Iraq.

On a different front, the battle between the PKK and Turkey in northern Kurdistan reached a new level. In a series of air strikes, gun battles, and attacks by the PKK 91 Turkish were killed and another 17 wounded, while the PKK lost 50. There were 5 civilian casualties as well that got caught up in the fighting. This started with one of the largest Turkish interventions in quite some time. Ankara reinforced its existing camps and set up new ones, and appears to be committed to staying for quite some time.

Sotaliraq, "A new Daash attack and mass exodus of residents from Kirkuk," 4/26/18

Al Sumaria, "Civilian injured in bombing of Turkmen candidates in central Kirkuk," 4/24/18
- "Shooting in an election meeting in Kirkuk," 4/21/18