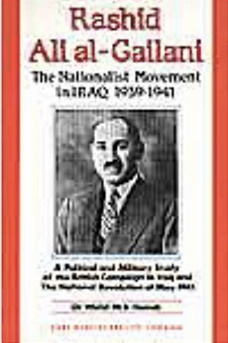 The government of Prime Minister Rashid Ali al-Gaylani and the Golden Square officers are an important, yet little known period of Iraqi and World War II History. At the very start of the war, a small group of pan-Arabist army officers backed Premier Gaylani who overthrew the monarchy, and aligned the country with the Axis powers of Germany and Italy. The draw wasn’t fascism, but rather the belief that the war offered their country a means to escape British hegemony, which remained after London created Iraq and ruled it as mandate from 1920-32. That led to a war with German and Italian intervention, which Iraq lost. While there are a few other books that cover this period, Rashid Ali al-Gailani, The Nationalist Movement in Iraq 1939-1941 is the most extensive and focuses upon the Iraqi rather than the British side of the conflict.


The book starts off explaining Iraqi politics in the 1930s. During that period, there were several trends. First, there was a huge expansion of the army promoted by the British which wanted the Iraqis to be able to protect their own country. This was all done under the auspices of London, which trained the officer corps and controlled promotions and arms purchases under the Anglo-Iraq Treaty. Many in the officer corps were Arab nationalists and came to look down on the political class, which led to 7 coups from 1936-41. Out of this milieu came the Golden Square, four young colonels in the Iraqi army who became powerful enough to determine the fate of governments. They resented the British influence. Then the Mufti of Jerusalem entered the story in 1939 when he arrived in Baghdad with 300-400 Syrian exiles that were pan-Arabists. They bolstered the standing of the Golden Square since they all shared the same ideology and opposed the English presence in the Middle East. The Golden Square officers along with the Mufti would push Iraq towards war.

The conflict with England would begin in 1941. First, at the start of the year the Mufti, the Golden Square, and Rashid Ali al-Gaylani started plotting against Premier Hashemi and refused British pressure to take a stand in World War II against the Axis. That resulted in a coup that overthrew PM Hashemi, and led the Regent of Iraq, the acting monarch, to flee the country. That alarmed London, which ordered troops from India to be sent to Basra, and pressured pro-British politicians to resign from the government to try to bring down the government. The premier reached out to Turkey to mediate hoping to evade a war, but Prime Minister Winston Churchill wanted Gaylani removed immediately through force of arms. Churchill feared that the Germans were making a pincer attack to seize the Middle East pushing from Libya towards Egypt with the Africa Corps in the west and then from the north through Syria and Iraq. In actuality, Adolf Hitler voiced support for the Arab cause against the British, but was much more interested in his impending invasion of the Soviet Union. What ensured was the 1941 Anglo-Iraq War as the British sent forces from Jordan and India, while Berlin and Italy sent weapons and several dozen planes to aid Baghdad. The book goes through the details of the conflict, as the Golden Square had no real plan to confront the British, while PM Gaylani failed at diplomacy to stem the conflagration.

There are a few other books that deal with this time period almost all of which cover the war from the British perspective. Rashid Ali al-Gailani, The Nationalist Movement in Iraq 1939-1941 is the only one that takes the Iraqi view. It gives the political dynamics as well as the military ones. It shows how PM Gaylani and the Golden Square weren’t looking for war. They just believed that the global conflict offered Iraq an opportunity to escape British influence. They were encouraged by the Germans and Italians that gave them words of support, but who were not looking for a conflict either. When it came, Berlin and Rome gave military support to the Iraqis, but they were completely out of their element against the British and things were over in just a few weeks. Dr. Walid Hamdi gives one of the best accounts of what happened and why.