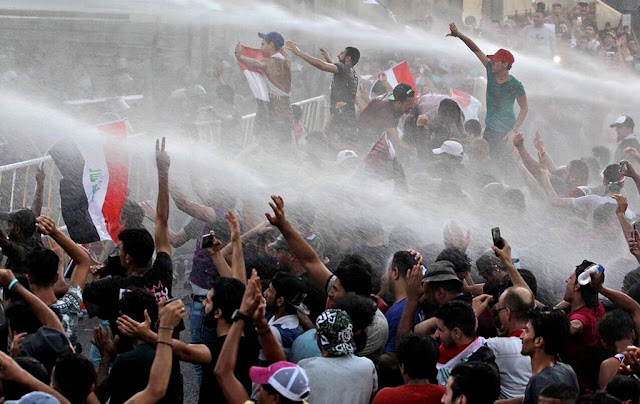 July 20 protests were organized across 10 provinces, the most since they started fifteen days ago. This was after a week of declining marches due to a government crackdown. The security forces (ISF) responded by breaking up almost all the gatherings, and two people were killed as well.


The entire south and Baghdad was active. In Babil, the police broke up a protest in the Hamra district. The largest gathering occurred in Baghdad’s Tahrir Square. The commander of the Baghdad Operations Command said that the security forces were there to protect the people. The authorities then claimed people attempted to march on the Green Zone, which prompted the police to fire tear gas, bullets and water cannons to disperse the crowd. Hundreds met in front of the Basra provincial council building demanding that the governor and district directors be dismissed. Thousands also showed up at the Dhi Qar governor’s house wanting the governor and the provincial council to step down. The security forces fired bullets into the air there as well to get people to leave. Hundreds protested in central Karbala for services and finishing projects. Despite government promises that people had the right to demonstrate, the ISF stopped people before they could even hold a march in the Magar district of Maysan. People were able to meet at the provincial capital of Amarah. There was a very small protest in Samawa, Muthanna against violence used versus demonstrators. Activists are planning a much larger meeting on Sunday. 2 people died, one in Najaf and one in Qadisiya. There were no details on what happened in the former, but in Qadisiya, people were throwing stones at a Badr office when a guard opened fire and killed a man, and hit others. Finally, there was a march in Wasit as well. Ten was the most provinces involved in the demonstrations since they started on July 5. In the previous days there have been fewer and fewer due to a government carrot and stick policy. The stick was used Friday as almost all the protests were shut down by the security forces. This is despite continued statements by Prime Minister Haidar Abadi that people have the right to take to the streets and make demands of the government peacefully.

Another part of the authorities’ program is to discredit the activists. That continued. A Dawa member Saad al-Mutalabi compared the protesters to children, said they were linked to the Baath Party, and claimed they were going to carry out acts of sabotage in Baghdad if not for the security forces stopping them. The commander of the Rapid Reaction Forces also told the media that the demonstrations were illegal because they lacked permits, and that trouble makers amongst the crowds were the reason why people were being arrested. The claim of Baathists being behind the demonstrations has been repeated on social media as well, and is a long time tactic of Shiite parties to raise the existential threat of the former regime to scare people. It’s also a code word for Sunnis, which causes problems for its use in this case since the events are almost exclusively in the southern Shiite governorates.

The last part of the Abadi administration’s stance is to make promises to the public that their demands will be met. The premier has allocated extra funds to Basra and offered jobs in that province as well. The problem is there is not enough employment, water, electricity or good governance to quell the protests. That would require structural reforms, which are not going to happen because there is no political will to do so. Talks with activists have quelled some of the demonstrations, which is the carrot part of the program, but Friday’s events show there’s still a lot of anger being expressed.

Al Ghad Press, “Anti-terror forces dispersed protesters in front of the house of the governor of Dhi Qar with live bullets,” 7/20/18
- “More than 30 protesters were suffocated in Tahrir square in central Baghdad,” 7/20/18

Al Mirbad, “A protest in Muthanna against the use of violence against demonstrations,” 7/20/18

Shafaaq News, “The security forces abandoned the demonstrations in Baghdad with water hoses and tear gas after trying to cross into the Green Zone,” 7/20/18

Al Sumaria, “Health announces the high toll of victims of demonstrators today in a number of provinces,” 7/20/18