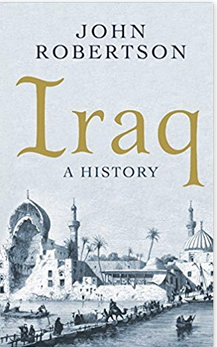 John Robertson was inspired to write Iraq, A History by the 2003 invasion of Iraq, which focused international attention upon the country. He sensed how little Americans and the West in general knew about the nation, and wanted to help rectify that. His main goal was to explain how important Iraq was to civilization starting back in ancient times up to the present day. Robertson was well suited for that as he is a professor of ancient Middle East history at Central Michigan University. The coverage of Mesopotamia, which makes up the majority of the book, is quite interesting, but the modern section is a bit lacking.


Robertson starts with Mesopotamia in 6000 BC when farmers first started irrigating their fields using the waters of the Tigris River. The breadth of this history means he’s not able to go into that much detail into each period, but he does keep the reader’s attention by including a number of interesting stories. For example, the Epic of Gilgamesh, which comes from the city of Uruk that was part of the Sumer era, the world’s first civilization, includes a story of a man who built a boat to escape a flood sent by a vengeful god that was the inspiration for Noah in the Bible. In northern Mesopotamia Sargon came to power and conquered the cities of Sumer and created the first empire. Robertson also dispels some of the commonly held views of the ancients such as the negative image the Bible paints of the Assyrians and Babylonians as brutal conquers. Those stories are not supported by the ancient cuneiform documents that still exist today. It is true that Nebuchadnezzar of the Chaldeans conquered Judah for rising up against the empire and took much of the Jewish population to Babylon. There Hebrew scholars began collecting stories and documents that became the basis for the Tanakh, which became the Christian Old Testament. Even after Babylon fell and Jews were free to return to Judah a large number stayed until modern Iraq when in the 1950s many chose to leave for the new state of Israel. Babylon also gave rise to the Zodiac and the Christian calendar from its extensive study of astronomy. When Babylon was conquered by Cyrus the Great from Persia the religion of the Prophet Zarathustra was introduced. It emphasized a divine good and a divine evil, and when people die their spirits are judged and either sent to a good or evil fate. Many of those ideas were adopted by Jews, which went on to influence Christians and Muslims, and became the basis for God and the Devil, and Heaven and Hell. There are many such stories that keep the narrative going. That section makes up 2/3 of the book, and is the most engaging.

When Robertson gets to modern times nothing really new is added. The portrayal of the U.S. invasion and occupation is a bit weak as Robertson tries to post that oil was the main motivation of the Bush administration. For example, he cites Vice President Dick Cheney’s energy group that focused upon the United States securing the energy resources of the Persian Gulf that included Iraq. If Robertson had read the whole report he’d find that Iraq was only mentioned in passing. There are more convincing arguments for the Iraq War that are not included. Iraq, A History also has a disappointing end. It brings up that Iraq’s oil wealth is leading to global warming. If that threat is to be solved then Iraq will eventually have to give up its natural resources something that would bankrupt it. Not the greatest of conclusions.

Iraq, A History is a good read for those that want a summary of Iraq’s ancient history. It can provide a starting point to further books. It also does a nice job connecting that past to modern times. However, it is not the source to go to if one wants to know about the country of Iraq. There are plenty of other authors that do a much better job covering that period.