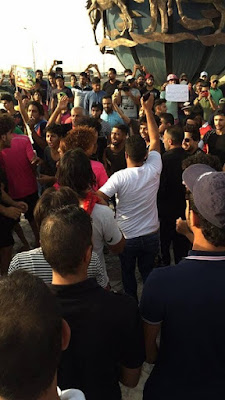 There were protests in three provinces on July 18, and three on July 19. Those occurred in Tahrir Square in Baghdad, Basra city and Mashreh in Maysan. Activists are trying to organize widespread protests in ten provinces for Friday, which is the day off in the Muslim world. At its peak, there were demonstrations in 9 of Iraq’s 18 governorates.


Protests have been dwindling because of the Abadi government’s carrot and stick approach. In Basra, the prime minister released three trillion dinars for projects, and opened 10,000 public sector jobs. 60,000 applied for those positions. The premier also met with delegations from Muthanna and Dhi Qar promising to meet the demands of protesters there. A Basra councilman credited these moves with quieting the masses. The other side of this strategy is the heavy deployment of the security forces (ISF) to put down the marches. The Iraqi Human Rights Commission condemned the use of excessive force by the ISF including shootings, beatings and arbitrary arrests at demonstrations. Amnesty International talked to two men who participated in an event in Baghdad who were then picked up by the ISF afterward and beaten and tortured. The security members wanted to know who was organizing the protests and whether they belonged to extremist groups. The army and Emergency Response units have been sent to various oil fields and the Um Qasr port in Basra, set up concrete barriers and shut down roads to try to keep people away from those sites. There is also a media campaign to discredit the activists claiming they are infiltrated by criminals, Baathists and other bad actors. Combined, this policy of attempting to talk to the protesters and going after their leaders and shutting down areas has curtailed activism. It’s yet to be seen whether this movement which is very diverse and localized can continue in the face of the Abadi government or whether demonstrations will become more sporadic throughout the rest of the summer.

Finally, Moqtada al-Sadr called on the winning parties to hold off negotiations to form a new government until the demands of the demonstrators are met. One of the factors that helped Sadr win the most seats in the recent election was his support of earlier protests and the widespread discontent amongst the electorate over the political status quo. His campaign promised an end to the ethnosectarian quotas that determine who got what positions, and to appoint technocrats who were qualified for their jobs. Since then however, things have been business as usual as the ruling elite made moves to form another national unity government that would likely end up just like all the others. Sadr’s statement was aimed at appeasing the street, and saying he had their interests at heart because he’s acted like the rest of the political class for all his talk of wanting to change things.

Al Ghad Press, “Hundreds of demonstrators staged a sit-in in the Freedom Square in central Basra,” 7/19/18

Al Mirbad, “Demonstration in Maysan demanding services and cutting through the port of al-Shaib,” 7/19/18