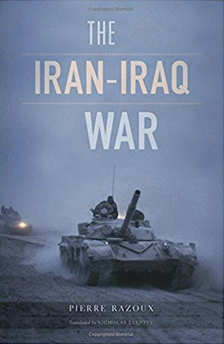 Pierre Razoux in The Iran-Iraq War was able to write both a very in depth book on the conflict, while also keeping it interesting with a series of engaging stories. That is not always the easiest thing to do as many would have gotten lost in the details.


Razoux goes into the Iran-Iraq War from the conflict between Saddam Hussein and the new revolutionary government in Iran, to all the battles, to the drawn out acceptance of a United Nations’ peace process. Razoux goes all the way down to the brigade and battalion level when covering all the various campaigns that were launched over the eight years of the war, and usually the equipment used such as which tanks and aircraft were employed. For some, that might be too much to read, but Razoux’s style is straight forward and engaging, and does not get boring.

For instance, the war started with an Iraqi air raid on Iran’s air bases in which Baghdad was hoping to destroy all of Tehran’s planes on the ground like the Israelis did in the 1967 War. The strike turned into a fiasco, which would set the stage for much of the war. The Iraqi pilots took off at night even though they had no night training. To avoid the Iranian radar they flew close to the ground, but had no terrain navigation systems. They didn’t have any bombs strong enough to penetrate the reinforced bunkers used at the Iranian air bases so they targeted the airfields, radars and logistics. Because of fear of being shot down the Iraqis only made one fly over each airfield and dropped their bombs at very low levels, again without any preparation for that kind of strike. The result was that most of the runways were missed, and only 4 planes were destroyed 3 of which were transports, while 5 Iraqi planes were shot down or crashed. All the Iranian airbases were repaired that night and were used to launch a counter strike the next day. Just like the Iraqis, the Iranians were no better at low level passes and did little damage. That characterized many of the operations launched by the two sides. They had great plans for striking victories but came up short almost every time.

What makes the book different from just a straight campaign series is that Razoux includes all kinds of events that were related to the war. There is a chapter on how France and America’s support of Saddam led Iran to order Hezbollah to kidnap their nationals in Lebanon. That in turn led to the Iran-Contra scandal. The war also became a boom for arms suppliers around the world. Many claimed neutrality, which was just a way for them to sell to both sides. China was a prime example that sold tanks and planes to Baghdad and Tehran. The Soviets had a friendship treaty with Iraq from the 1970s, but relations had soured between the two over a crackdown on the Iraqi Communist Party and Saddam reaching out to the west. That meant the Soviets would continue to sell armaments to Iraq, but constantly tried to reach out to Iran as well and make deals with them. These are all very interesting and keep the book going.

There are several books out on the Iran-Iraq War, but this is one of the best. It captures the international impact of the conflict. It’s important to know because it shaped so much of the present world. The Iranian leadership for example is mostly made up of figures that came to power during the war. The huge debts that Iraq racked up to pay for the fighting would lead to the invasion of Kuwait in 1990, which would eventually be a factor in the 2003 U.S. invasion and overthrow of Saddam. If one wants a thorough review of the war and its consequences this is the book to read.