Protests Continue Across Southern Iraq And Spread To Baghdad


After July 13’s events where there were protests, occupation of government offices, burning political party buildings across seven provinces, and the deaths of two people at the hands of the police there were more such activities the next day. 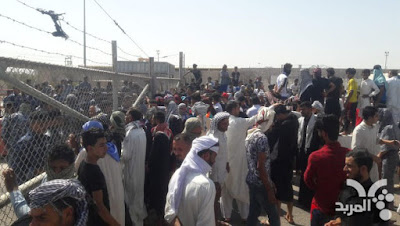 Protest at the Majnoon oil field in Basra (Al Mirbad) 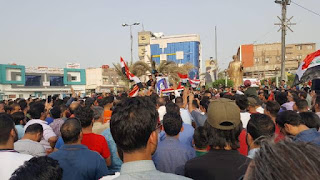 Demonstration in Dhi Qar (Al Sumaria)
July 14 there were demonstrations in 9 provinces. In Babil, people blocked main streets and stormed the offices of the Dawa and Fadhila parties. Baghdad saw a small march at midnight, and then the Communists held a gathering during the day. Basra had the most widespread agitation with protesters returning to the provincial council building for the second day, the Badr headquarters were set on fire and guards opened fire to try to stop the crowds, and a curfew was imposed on the city as a result. In the southern section of the provinces, people came out in the Shatt al-Arab district, and were blocking the entrances to the Rumaila, Majnoon, and West Qurna oil fields, along with the Um Qasr port. 6 protesters and 36 police were wounded in Dhi Qar when a crowd tried to take over the governor’s house. The provincial council building was taken over in Karbala, Asaib Ahl Al-Haq’s office was burned leading to security forces to again shoot at demonstrators in Najaf leading to another curfew there. There were also marches in Maysan, Najaf, Qadisiya, and Wasit. These people were all angry at the lack of jobs, electricity and water shortages, and poor governance. These complaints have been voiced for years now leading to annual protests every summer. The fact that the authorities have never seriously met any of their demands has led to increasing anger and a general loss of faith in the political process in general.

The government of Prime Minsiter Haidar al-Abadi responded three ways to the last few days’ events. First, it shut down internet service in the hopes that organizers would not be able to get people to come out. This was a bad precedent of the authorities attempting to limit freedom of speech. Second, the premier ordered the release of 3.5 trillion dinars for electricity, water and health projects in Basra. This comes after a government delegation promised more drinking and potable water, increased electricity, and 10,000 jobs. This has two major problems. First, these projects will not be completed any time soon, as there is often a long drag between something being announced and something actually coming to fruition due to the large bureaucracy in Iraq. Second, Abadi is running a caretaker government right now as the political parties are waiting for the votes from May’s election to be certified to form a new administration. That means when a new premier comes into office he may not follow through with these promises. Finally, Abadi made ominous comments about “infiltrators” and people attempting to exploit the protests for their own political gain and to destroy property.  The Counter Terrorism Forces and the army’s 9th Division were also sent to Basra on July 12. This is the second time Abadi has warned about people manipulating the demonstrations. This could be a justification if he orders the security forces to crackdown on the marches and shut them down. The fact that the government has attempted to block the organizers, made empty promises, and set the stage for deploying the security forces against the protesters, while anger looks to be spreading does not bode well for the future.

Al Alam, “Continuation of the protests in Iraq … and raise a state of alert of the security forces,” 7/14/18
- “Iraq between the flames of protests and the incursion of terrorists,” 7/14/18

Al Ghad Press, “The closure of the northern port of Um Qasr in Basra by dozens of demonstrators,” 7/14/18
- “Return of protesters in the front of the Basra provincial council building after the removal of tents,” 7/14/18

Al Masalah, “Abadi releases 3.5 trillion dinars immediately to support services and water desalinization in Basra,” 7/14/18
- “Asaib Ahl Al-Haq reveals the detaisl of the armed attack on its headquarters in Najaf,” 7/14/18

Al Mirbad, “The residents of the Shatt al-Arab are demonstrating to demand services and appointments,” 7/14/18

Al Rafidain, “URGENT Demonstrators burn the headquarters of the Badr militia in Al-Tawisa area in the center of Basra,” 7/14/18

Sotaliraq, “Protesters break into the headquarters of the Islamic Party and cut off the roads in Babil,” 7/14/18