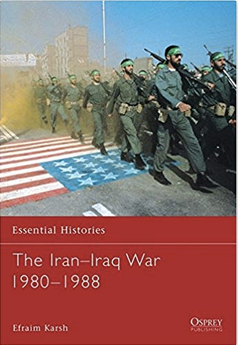 Osprey’s Essential Histories series gives brief reviews of some of the major conflicts in the world from ancient times to the present. Its offering on the Iran-Iraq War has less than 100 pages in text. While it goes over the major battles and explains how senseless the war was, it’s main problem is that it gives an Iraqi centered explanation for how things started.


According to author Efraim Karsh the Iran-Iraq War was the result of Tehran’s threat to Saddam Hussein. In 1979 Ayatollah Ruhollah Khomeini came into power, began talking about exporting Iran’s revolution, and how Iraq was a barrier to achieving that goal. As a result, Tehran urged Iraqis to overthrow Saddam, armed the Kurds, and backed Shiite opposition parties that carried out a series of assassination attempts against the Iraqi leadership. Iraq on the other hand, was conciliatory towards the revolutionary government at first, but then due to its actions cracked down on its Shiite population and supported opponents to Khomeini. That escalated to border skirmishes and then heaving fighting, and eventually Iraq’s invasion in September 1980. Karsh claims that Saddam was a reluctant warrior and only wanted to fend off the threat of Iran. As a result, Iraq only had the limited goal of cutting off the Shatt al-Arab waterway that was Iraq’s only access to the Persian Gulf. That doomed Baghdad, because it stopped before it had achieved a decisive victory over the Iranian military allowing it to regroup and carry on with the war. This is a completely Iraq centric view of the causes, and therefore only tells part of the story. Baghdad was open to the new Iranian government at first, and Khomeini responded by calling for Saddam being deposed and started border clashes. Iraq however, was not just on the defensive. The Revolutionary Command Council met right before the invasion and Saddam said that it was time to seize the Shatt al-Arab waterway because Iran was weak and would not fight back. He also hoped the invasion would spark a revolt or at least the Arabs in Khuzistan province would rise up and back Iraq. Karsh attributes Iraq’s modest goal to the fact that Saddam did not really want to go to war, when it was the exact opposite. There’s also no explanation on how taking the Shatt al-Arab was supposed to stop the problems Khomeini posed. Ironically, in the conclusion the author notes that Iraq did have larger goals, so it wasn’t so constrained.

What the book does a better job on is going through the major campaigns, providing good maps, and explaining how futile the war was. Iraq failed in one of its major goals on the first day of the invasion when it did not destroy Iran’s air force on the ground. In less than a month it got bogged down. After a short stalemate, Iran went on the offensive in 1981, and held the initiative for the next six years. Instead of using the successful tactics it employed to blunt the Iraqi thrusts initially it turned to human wave attacks by the Iranian Revolutionary Guard, largely because of the political support it had within Tehran’s leadership. Iran had as much luck as Iraq did and suffered devastating losses on top of that. Karsh called it a battle of incompetents. Bad leadership, inexperienced troops, the inability to maintain its forces and other factors meant neither side was able to deliver a knockout punch and win the war. Instead the two signed a ceasefire that maintained the status quo after eight bloody years.

Due to the poor analysis at the start The Iran-Iraq War 1980-1988 cannot be recommended. There are better books to turn to for a starter explaining the conflict.