Protests In Iraq Greatly Escalate And Spread Throughout South


In just a few days the annual protests in Iraq have greatly accelerated. There had been a week of protests since the start of July, but then July 8 in northern Basra province a demonstrator was killed by the security forces. That gave impetus to greater activism, and another person dying from gunfire on July 12, leading to an explosion of people taking to the streets on July 13 across southern Iraq, which saw ports, airports, and political offices occupied and attacked. The government offered some platitudes in response, but the public was far from satisfied.

July 13 there were demonstrations throughout southern Iraq. That started in Basra where some shut down the Um Qasr port in the south. Prime Minister Haidar Abadi arrived in Basra city to discuss the on going events. He was met by demonstrators that took over the courtyard of the hotel he was staying in. The premier created a delegation to meet with the people, but they refused saying that nothing would come of it. In the north, the Bani Mansour tribe, which had been organizing people since one of its members was killed by the security forces on July 8, called a halt to activities after it talked with representatives from Abadi’s office, the Oil Ministry and the Basra governor. 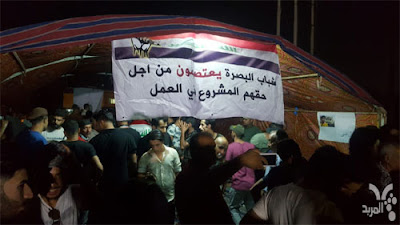 There was similar activism in six other governorates. In Maysan, the headquarters of the Dawa, Hikma, Supreme Council, and Badr along with the provincial council building were all stormed by people. The Dawa and Hikma offices were set on fire, and a guard at the Badr building killed a person. Demonstrators took over the Najaf provincial council building the international airport, walking onto the runways, and set Kataib Hezbollah’s office on fire. There were also marches in Babil, Muthanna, Qadisiya, Dhi Qar, and Karbala. 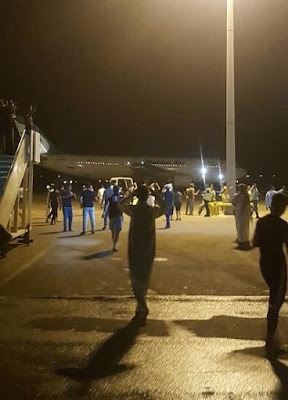 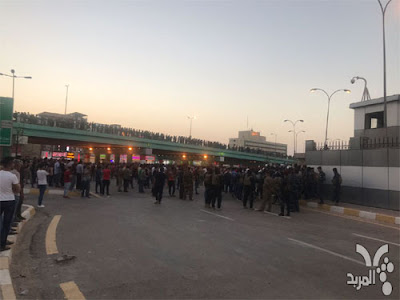 This was a large escalation as the day before activists only came out in Basra and Baghdad. July 12 there were demonstrations in Imam al-Sadiq in northern Basra where the first protester was killed. People also tried to break through the gates around the West Qurna 2 oil field, prompting security to shoot at the crowd wounding three. They were joined by people in the south in Zubayr, Basra City where the South Oil Company building was occupied leading to police firing into the crowd killing one and wounding 3 and at Basra airport where people blocked the road, and at the Rumaila oil field. There was also a solidarity march at Freedom Square in Baghdad.

Every summer there are demonstrations mostly in southern and northern Iraq. This year they started in May and grew vastly in July spreading throughout the south. Every year people express the same demands involving jobs, better government, electricity, and water. This year is worse as there have been record heat levels, salinity in Basra is growing along with a new dam in Turkey that have greatly limited the water supply, and Iran has cut its delivery of electricity to Iraq over unpaid bills.

The government has responded with largely empty promises. Prime Minister Abadi met with the head of the Basra Oil Company and the Oil Minister and promised to find more employment. The problem is the petroleum industry is not labor intensive and doesn’t use many workers to begin with. The international oil companies that run Iraq’s fields also employ many foreigners. Demonstrators have demanded that they be fired and replaced with locals. That’s unlikely to happen either as many Iraqis lack the training and skills necessary for the jobs. Local governments have promised that more power will be supplied. How that is going to be achieved with the increased usage during the summer heat and the decrease in supply from Iran was never explained. Finally, Baghdad had a year to prepare for the water shortage that would occur when Turkey started filling its new damn, but made no preparations. Now it is limiting certain crops to cut water usage. Needless to say, the government has no answers to these problems even though they have been issues for years. The frustration with the authorities has boiled over from annual protests to disillusionment with the political process as May’s election saw the lowest voter turnout since elections started in 2005.

Al Alam, “Demonstrations in the holy city of Karbala, Maysan and Nasiriya due to the deterioration of electrical services,” 7/13/18

Al Ghad Press, “Video: Direct shooting at demonstrators in the area of Al-Anwar in central Kut,” 7/12/18

Al Mirbad, “Basra: Activists organize a solidarity rally with demonstrators in the area of Bahala,” 7/10/18
- “BASRA: Demonstrators in Karma cut a major road and security forces intervened,” 7/12/18
- “Basra health: one dead and 13 injured the outcome of the demonstrations,” 7/12/18
- “BASRA: Hundreds of people in Bahla cut road to oil companies to protest the killing of a demonstrator,” 7/9/18
- “Demonstration in central Baghdad in solidarity with protests in Basra,” 7/12/18
- “Demonstration in the Shatt al-Arab district to protest the high salinity of water,” 7/9/18
- “Demonstration in Zubayr to demand services and recruitment and stop environmental pollution,” 7/11/18
- “Dozens of demonstrators demonstrate in front of Russia’s Lukoil north Basra,” 7/10/18
- “The end of a failed demonstration north Basra after giving deadline to achieve their demands,” 7/13/18
- “Protest march in Zubayr demanding services and appointments and threatening escalation,” 7/12/18
- “Security forces prevent attempt to storm Maysan provincial council building,” 7/13/18
- “We will continue to demonstrate until all demands are met,” 7/12/18