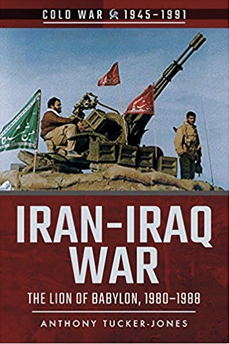 Picking up Iran-Iraq War, The Lion of Babylon, 1980-1988 it might appear to be a regular campaign book that goes through the causes of the war and then covers it battle by battle in chronological order. In fact, even though it is quite short, only 128 pages total, it actually is able to cover a lot. Rather than going from start to finish it begins with the background to the war, the initial battles, and then goes into thematic chapters such as how the American and Soviet superpowers saw the conflict, the Tanker War when Iraq began attacking shipping going to Iran, and Baghdad’s use of chemical and biological weapons.


Author Anthony Tucker-Jones believes that the cause of the war was control of the Shatt al-Arab waterway. Baghdad had a very small shoreline, 26 kilometers that severely constrained its access to the Persian Gulf, which was important for trade and its main industry oil, which mostly relied upon tanker ships docking at its few ports. Iraq had disputes over the waterway with both Kuwait and Iran in the past. That added to the new revolutionary Iranian government of Ayatollah Ruhollah Khomeini that wished to spread its ideology to Iraq gave Saddam Hussein the impetus to invade in September 1980. Most histories talk about Tehran’s threat to Iraq as the main reason the war started, but Baathist internal documents show that the regime saw great opportunity with a weakened Iran to seize the Shatt al-Arab.

Neither Iran nor Iraq was ready for what was to come. Both had plenty of weapons, but lacked experience, supplies, and strategic thinking that led to few real gains and dragged out the conflict for years. Baghdad hoped for a quick victory, but lost the initiative in just a few weeks, and had no idea on what to do next. By 1982 Iran went on the offensive and invaded Iraq, but could only make limited gains on the battlefield because of military shortcomings. For instance, Iran’s air force was considered pro-Shah so was purged by Khomeini’s government. There were so few pilots when the war started that some had to be released from prison. That problem was never resolved, the planes were chronically short of parts, and the force wasn’t able to stop Iraqi air raids upon its cities and oil infrastructure. Iraq wasn’t much better. Despite having air superiority for all eight years of the war, it failed to coordinate its air strikes with the ground forces, and couldn’t exploit its attacks on shipping or Iran’s oil industry. There were similar limitations with the two armies. Both sides had hundreds of tanks, but most ended up being used as static pill boxes for defense or artillery. These were some of the main reasons why neither side was able to penetrate more than a few miles into the territory of the other before getting bogged down. Hundreds of thousands of soldiers and civilians were killed and wounded as a result. Iraq discovered the errors of its way almost immediately after the war started, and tried to end it, but it wasn’t until 1988 that Iran found itself exhausted and agreed to peace. The whole affair could be characterized as one of miscalculation, poor planning and incompetence.

Iran-Iraq War provides some good insights and emphasizes the huge toll the war took on the two countries. There is a good collection of combat photographs, and color maps in the middle showing where the major campaigns took place. It’s definitely a good introduction to the conflict.


I recall an article in the L.A. Times at the time wherein the author wrote that advisors to the Iraqi army tried to get the Iraqi commanders to use their army differently. They wanted it to become more mobile. Iraq had the equipment and used it to capture cities and villages then instead of out maneuvering the slower Iranians' response, simply sat on their capture and engaged in bloody fights when the less mobile Iranians arrived to counter attack. WW1 with an immobile armor frosting.

The Iraqi army was based off the Soviet model using lots of tanks and attacking. It tried that at the very beginning of the invasion, but when it ran into the cities it was supposed to capture it immediately got bogged down. That led to a period of stalemate and then Iran was on the offensive for the next several years. Most of those attacks were in the south where there were lots of marshes and waterways and not suitable for tanks or armor or a war of maneuver.