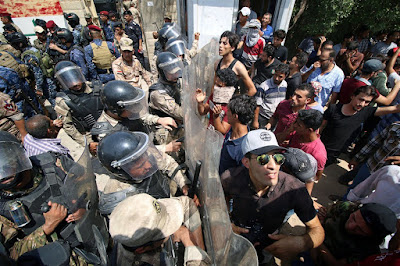 (Reuters)
Prime Minister Haidar Abadi finds himself in a precarious situation. Starting July 5 protests started in Basra and then spread throughout the entire south and then Baghdad. Right now he is heading a caretaker government until the election results are certified and a new administration takes over. That means he has little authority to meet the demands of the demonstrations, especially because many of them require structural changes that would be a challenge to any premier. While he has pledged to meet as many of the protesters’ wants as possible, he has also attacked their integrity, tried to block their organizing and broken up their gatherings.


PM Abadi has constantly said that people have the right to protest, but he has a launched an information campaign to discredit them. Various members of Abadi’s Dawa Party have told the press that there are groups attempting to exploit the demonstrations for their own means, some were trying to overthrow the government, carry out sabotage and were linked to the Baath Party. The theme of these comments is that people are being used to threaten the state. The Baath charge especially has been a hallmark of Dawa from the Maliki days against opponents, and is used to scare Shiites. The irony is that these protests are almost all in the Shiite south. As one activist told Al Mada, the government was attacking the protesters’ standing rather than dealing with the issues they brought up.

Another move has been to shut down the Internet to try to block people from organizing. Originally, the authorities claimed that there were technical issues that took down the web. Amnesty International then reported that the government was cutting the Internet to try to block the protests. The Communications Minister then said that certain websites were being blocked because they were being abused by demonstrators. Many Iraqis are on Facebook, and have used it to plan and carry out protests. Activists complained the government’s actions hindered that.

The security forces (ISF) have taken various actions to stop people from gathering. In Basra, there used to be demonstrations at oil fields to demand jobs. That has stopped because the ISF have blocked off the entrances to those sites. On a few occasions the police have broken up protests before they have even started. That happened in Qadisiya and Maysan. Some of those that have been arrested complained that they were beaten and tortured. Others were forced to sign pledges that they would not demonstrate again in order to be released. The ISF have targeted organizers and have warrants out for their detention. Last, the police have started shooting at crowds without warnings several times. Going after activists and making detainees sign papers not to protest expose the government’s attempts to shut down this movement. When demonstrations have grown large in scale before, the authorities have used similar tactics to intimidate and crackdown upon them. The beatings and shootings also show the police often resort to unnecessary force to deal with these marches.

The last thing the government has done is try to limit media coverage. The Iraqi Observatory for Press Freedom reported more than 50 journalists in Babil, Basra, Dhi Qar, Karbala, Maysan, Muthanna, Najaf, and Wasit had been arrested. Reporters have also been attacked by the ISF at protests, and there are warrants out for some. These are more violations of Iraqi freedoms. This is a method the authorities have used before to intimidate reporters so they don’t cover protests.

These are all examples of the Abadi government’s program to undermine and silence this year’s protest movement. This is the stick the administration is using. There are also carrots such as pledges to answer the demonstrator’s demands, meetings with provincial authorities, the creation of committees that are supposed to improve services, promises of jobs, etc. These moves have worked to some extent. Some groups have called off their actions, and there have been fewer demonstrations overall. July 25 was the first time in twenty days there were no gatherings. Activists are now talking about fewer events. They will have to see whether they can keep up momentum and maintain people’s enthusiasm against the authorities attempts to buy them off and shut them down in the comings weeks.

Al Aalem, “Demonstrators in Baghdad: release our prisoners conditional on bail and provoked security elements … And snipers over rooftops,” 7/21/18
- “Document: Intelligence pursues activists who launched protests in Diwaniya,” 7/21/18
- “Source: The disappearance of a demonstrator in Baghdad and the imposition of two pledges … 22 convictions in Diwaniya and arrests of activists in Nasiriya,” 7/18/18

Al Mirbad, “Minister of Communications to Mirbad: The government has blocked sites that were used badly

Shafaaq News, “Observatory: The killing of protesters has become systematic and the authorities impose pledges not to demonstrate,” 7/22/18