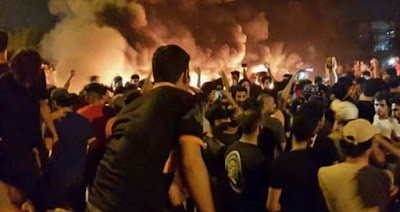 As Iraq reached its 11th day of protests there were events in six provinces. The real news of the day however was with the Abadi government, which promised new programs to meet the demands of the demonstrators, while starting a crackdown on activists.


People came out into the streets in Baghdad, Basra, Dhi Qar, Karbala, Muthanna, and Najaf. In the capital, there was talk of huge demonstrations, which did not materialize. At the start of the day there were two gatherings in Tahrir Square and Shula, and then people went home. At night, when the temperature went down there was a new march of around 300 in Shula. Police were given orders to arrest all demonstrators, and forcibly broke up the protesters with 1 killed. In Basra, people came out to the Siba gas field, the provincial council building in Basra city, and the Um Qasr port. Someone also blew up an electricity tower serving the West Qurna oil field with an IED. There were protests in several areas of Dhi Qar that included the main highway to Baghdad being shut down with burning tires, one in Karbala city, one in Muthanna, and one in Najaf where people tried to storm a Badr office. A protester that was shot yesterday also died in Karbala bringing the total death count to 16 since the daily demonstrations began.

The government began a two track carrot and stick approach. Prime Minister Haidar Abadi said that people had the right to protest and demand services. The cabinet announced that electricity would be distributed more fairly to the provinces, and a committee would be created to oversee the projects Abadi released money for yesterday. The chairman and his deputy for the Najaf airport were going to be removed, and there was talk that the Electricity Minister would be dismissed. On the other hand, police in Baghdad, Basra, Maysan and Muthanna began going after activists organizing the demonstrations as well as regular protesters. The premier also talked about criminals taking advantage of the marches. This was fourth straight day he has mentioned infiltrators and agitators setting the stage for the crackdown that began today. Every year there are protests and the authorities promise they will do something about their demands. The country is facing the usual power shortages with record high temperatures. That situation is made worse by Iran cutting off its electricity deliveries because of unpaid bills. The only way the government has been able to send more power to the south was by cutting it in other provinces. Likewise, every time there is a crisis a committee is formed, which ends up doing nothing. It is simply for looks. Firing a few government officials will appease no one either as it is a meaningless concession, and does not change the structural problems the country is facing. Finally, Abadi has been warning about the bad elements within the demonstrations for several days now. The marches also reached the capital. Together that has led to the beginning of a crackdown. The Iraqi forces are attempting to detain the organizers to stop future protests, while rounding up the people on the street to stop the immediate situations.

Al Alam, “Iraqi demonstrations extend to Shula due to the deterioration of electricity,” 7/16/18

Al Ghad Press, “Baghdad Police Command: arresting anyone who incites to demonstrate, and who burns tires and graffiti,” 7/16/18
- “Dozens of demonstrators protest in front of Dhi Qar provincial council,” 7/16/18
- “Riot police: a demonstration broke out in Shula broken up with live bullets and some of city’s entrances were closed,” 7/16/18

Iraq Newspaper, “The Americans Are Stopping Civil Aviation To Baghdad And Shelling The 17h Brigade Headquarters in Mahmudiya,” 7/17/18

Al Maalomah, “Abadi: It is the right of the people to demand their rights and improve services and call on the security forces to contribute to construction,” 7/16/18
- “Deputy from Basra announces the end of popular demonstrations in the province,” 7/16/18
- “Hashemi: The parties entered the demonstrations to escalate and reduce opponents,” 7/16/18
- “Hassan Salim reveals the infiltration of demonstrations by Saudi Arabia and the Baath party,” 7/16/18

Sotaliraq, “Government cut electricity share from Ninewa and sent it towards “angry” provinces,” 7/15/18
- “Governor of Najaf agrees to dissolve board of directors at the airport and denies the existence of a curfew,” 7/16/18
- “Protests continue in southern Iraq as tribes cut a main road leading to Baghdad,” 7/16/18

Al Sumaria, “Dozens demonstrate and cut streets in the center of Karbala,” 7/16/18
- “Riot police disperses a demonstration in Shula and others spread to Amil,” 7/16/18