Review Reclaiming Iraq, The 1920 Revolution and the Founding of the Modern State

Kadhim, Abbas, Reclaiming Iraq, The 1920 Revolution and the Founding of the Modern State, Austin: University of Texas Press, 2012 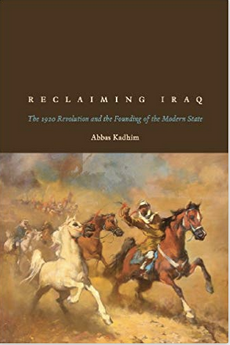 The 1920 Revolt against the British in Iraq is a seminal moment in the country’s history. Over time, the event has been idealized, distorted, and misrepresented by the British, the monarchy, and every government in Baghdad afterward. The goal of Abbas Kadhim’s Reclaiming Iraq, The 1920 Revolution and the Founding of the Modern State was to cut through this literature, and represent what some of the leading participants had to say. Abbas believes 1920 marked a political revolution in Iraq where the tribes and clerics of the Mid-Euphrates rose up to demand Iraqi independence. It can be said that they succeeded in the short term, England gave up direct control of the country under the Mandate, but it maintained its influence over the country for the next 30 years via the monarchy it installed.


Abbas believes the heart of the matter was the British broken promise to not be imperial powers in Iraq after it conquered the territory during World War I. When the British army entered Baghdad in 1917 commanding General Sir Stanley Maud issued a broad statement that his forces were not going to be occupiers and that the Iraqis would have their own state ending the foreign rule of the Ottomans. The general was forced to make the document and later rejected that it had been so broad in scope. What London ended up doing was convincing the League of Nations to place the Ottoman provinces of Basra and Baghdad under a mandate until 1930 when it was supposed to be admitted to the League. Iraq was considered too important because of its location along the route to India, London’s most important possession, the protection it gave to the oil fields in Persia, and its position along the Persian Gulf. British officers were put in charge of each province and district, and followed the example of India with direct colonial rule. The British looked down on the Iraqis as ignorant and incapable of self-rule, and their mistreatment of locals would lead to southern and eastern Iraq to rise up in 1920.

Abbas calls these events a revolution rather than the more commonly used term revolt. He argues that the uprising convinced the British they could not run Iraq as a colony. Instead they began moves towards the promised Iraqi independence and the creation of a government that ended up being ruled by King Feisal who originated from the Hijaz, which is modern day northern Saudi Arabia. There is a question of whether this can qualify as a revolution. It definitely changed the political system from colonial to an Iraqi state. At the same time, the new monarchy was still under British control. Not only that, but the British created a minority run Sunni government that would cause problems for the country until the present day. While one might doubt the word usage, Abbas is correct that it did completely change British plans, and made Iraq a nation.

The book does a great job explaining all the different aspects of the 1920 Revolt. Its main participants were the tribes of the Mid-Euphrates and the Shiite holy cities of Najaf and Karbala that include modern day Dhi Qar, Muthanna, Qadisiya, Wasit, Najaf, and Karbala. Some sheikhs of Diyala eventually joined in. Later histories would try to write out the role of these groups for Sheikh Dari in Fallujah who killed a British officer and led his tribe into revolt. This was used by Sunni governments to try to portray their community as being the leaders of the fight against the British. Abbas goes through those and other histories that have each taken a different approach to 1920 to push its interests. He also goes into the social structure of the tribes, sheikhs, religious men, and land ownership of the Mid and Upper Euphrates regions. That’s interesting because it gives insight into not only early Iraq but what the area was like under the late Ottoman period. Two main draw backs during these parts of the book is that sometimes Abbas gets lost in the details, and there is no good map for where the revolt took place. At the beginning, there is a 1920 Times of London map of Iraq, but it does not have many locations of where the revolt took place.

Reclaiming Iraq is important because it tries to re-write the history of the 1920 Revolt by going through all the different versions of the uprising, and then showing what the actual British and Iraqi participants said about it. It’s very short and easy to read, and provides good insights into these event and the creation of the Iraqi state.