Activists Focusing Upon Fridays For National Protests In Iraq 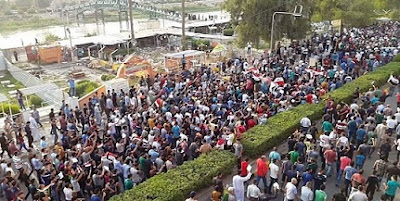 Activists are concentrating on Fridays for national protests in Iraq. On July 27, there were gatherings in Babil, Baghdad, Basra, Dhi Qar, Karbala, Maysan, Muthanna, Najaf and Qadisiyah. Most met in front of provincial council buildings, sometimes in the hundreds. The movement was bolstered by a Friday sermon by Ayatollah Sistani’s representative that called for the government to meet public demands and to fight corruption. The demonstrators have expanded from asking for jobs, electricity, and services to demanding that many governors and councils be dismissed, and now calls for PM Abadi to step down as well.


This year’s demonstrations started on July 5 in Basra demanding jobs from the international oil companies operating in Iraq. After a man was killed by guards outside the West Qurna 1 field the protests spread to the rest of southern Iraq and eventually Baghdad. There were marches everyday until July 24. The Abadi government responded with a carrot and stick approach. On the one hand, there were meetings with provincial governments and representatives and promises to provide better services and jobs. On the other hand, the government attempted to discredit the movement claiming it was infiltrated by Baathists, shut down the Internet so people couldn’t organize, and then beat, arrested, and shot at demonstrators and the media. This approach was having a decided affect as the number of protests were declining. That’s probably one major reason why activists have switched to focusing upon Fridays.

Every summer there are protests in Iraq usually spurred on by the high temperatures and the lack of electricity. Asking for better services and government would require structural changes that no administration can implement because of resistance from the ruling parties or would take years of reforms. The desire for more jobs is either asking the wrong sources because the oil business is not a labor intensive industry or would perpetuate the system because there are already too many public sector jobs already. With no real solutions possible there will continue to be demonstrations for the foreseeable future each year until they burn themselves out and they give into government pressure.

Al Masalah, “Renewed demonstrations in Baghdad and the provinces,” 7/27/18

Al Mirbad, “The withdrawal of protesters in northern Basra from the site of Russia’s Lukoil,” 7/27/18

Sotaliraq, “Rally in Sulaymaniya in solidarity with the demonstrations in the south,” 7/26/18

Al Sumaria, “Dozens organize a protest rally in central Karbala and demand better services,” 7/27/18
- “Hundreds of demonstrators in Maysan demand Abadi to “fulfill his promises” to provide jobs,” 7/27/18
- “Najaf protesters demand a change of regime to a presidential one,” 7/27/18
- “The sheikhs of Nasiriya give the government two day sto meet the demands of the people and threaten sit-ins,” 7/27/18