During the first week of July 2018, the security forces (ISF) launched a major sweep through central Iraq after several people were kidnapped and murdered along the Baghdad-Kirkuk highway. Unfortunately, this operation and several others had no real effect upon violence. There were roughly the same number of incidents in Diyala, Kirkuk, and Salahaddin as the previous week. These are the three areas where the Islamic State is rebuilding the insurgency.

From July 1-7, there were 56 incidents reported in the media. Since May there have been roughly 50 incidents per week. Kirkuk, 10 incidents, Diyala, 14, and Baghdad, 15, had the most activity. There was also a Turkish air strike in northern Kurdistan and an assassination of a commander in Moqtada al-Sadr’s Sayara al-Salam militia in Najaf.

56 people lost their lives and 91 were wounded during the week. 4 members of the Kurdistan Workers Party (PKK), 9 Iraqi Security Forces (ISF), 11 Hashd al-Shaabi, and 34 civilians were killed, while 11 Hashd, 17 ISF, and 63 civilians were wounded.

Anbar, Babil, and Ninewa remained relatively quiet. In Anbar, there was just one IED in Rutba in the west by the Jordanian and Saudi border. In Babil, there was mortar fire on a checkpoint and a woman’s body was found shot both in the north. There are Islamic State elements both infiltrating into the west of Babil from Anbar as well as cells operating in the upper section of the province. In Ninewa, there were 7 incidents. That included a mukhtar’s house being bombed by an IED in Mosul, a car bomb being destroyed in Tal Safouk in the west along the Syrian border, and a Mukhtar and his three sons being killed within their home in the Badush district just west of Mosul. Since the start of the year, IS has largely withdrawn from these governorates leading to only sporadic attacks in all three.

Towards the end of June, 52 Shiite militiamen were killed in an airstrike in eastern Syria. Pro-Iranian Hashd elements immediately blamed the United States for their deaths. The Americans reported no activity in that sector, and the media speculated that it was actually the Israelis that were responsible. The deputy commander of the Hashd Abu Muhandis told the media that fatalities were all members of the Hashd al-Shaabi and operating in Syria to defend the Anbar border town of Qaim. The Iraqi government has continuously denied that any Iraqi forces are officially fighting in Syria. Almost all the pro-Iran Hashd brigades however, have been fighting there since 2011 to help Tehran bolster the Assad government. Residents of Qaim told Al-Monitor that Hashd units are continuously crossing the border into Syria. While officially part of the Iraqi forces, the Abadi administration has little control over those whose loyalties lie with Iran.

Baghdad saw its normal mix of shootings and IEDs. The one exception was a town in the north was attacked by the insurgents, which is a growing trend during this summer. 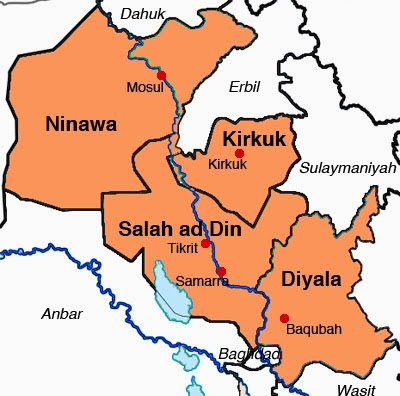 (US Business Council in Iraq)

After several people were kidnapped and killed along the Baghdad-Kirkuk highway in June the government forces launched a large campaign to sweep the area called Revenge of the Martyrs. There were also three other sweeps in Diyala and Salahaddin during the week. These like earlier ones had no real effect upon security in Diyala, Kirkuk and Salahaddin. In Diyala, two villages were attacked, and the militants set up a fake checkpoint where they kidnapped and killed 7 people. In Kirkuk, a suicide car bomb hit a warehouse holding ballots that were being recounted. There was also an ambush of a tribal Hashd patrol in the Hawija district. Finally, in Salahaddin another village was assaulted by IS and one person kidnapped. Central Iraq is where IS is making its comeback. They have rebuilt their networks in rural, mountain and border areas of these three governorates and are now growing bolder in their operations. There are more direct confrontations with the security forces as well as different attempts to control these areas and intimidate the population. The regular government operations have been ineffective because they go through an area and then leave. They are also not getting good intelligence to try to break up these insurgent forces.

Buratha News, "The popular crowd is carrying out a pre-emptive operation in the Hamrin Mountains," 7/7/18

Al Ghad Press, "Four people were injured in a failed attack on a border village between Diyala and Salahaddin," 7/2/18

Iraq Newspaper, "7 Killed And Wounded In The Popular Crowd North Of Baghdad," 7/2/18
- "Daesh Terrorist Commit New Crime In Mosul By Slaughtering The Mukhtar Of Bagla And His Three Children In Front Of Their Women," 7/5/18
- "Mukhtar In Nasr District Was Seriously Wounded And Two Members Of His Guards Were Killed In The Bombing Of His Home In Mosul," 7/2/18

Al Maalomah, "The popular crowd launches an operation to chase down Daesh remnants east of Samarra," 7/1/18

Shafaaq News, “Engineer accuses Joint Operations Command and announces details of the US raid,” 6/24/18
- "Turkey announces the killing of four PKK militants within the Kurdistan Region," 7/1/18

Al Sumaria, "One civilian was killed and another injured by a bomb on a road on a border village between Diyala and Salahaddin," 7/1/18