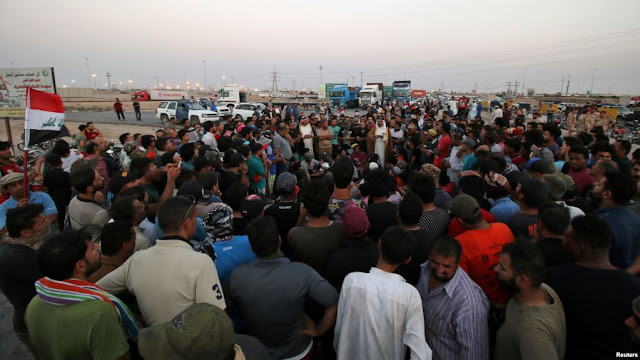 (Al Hurra)
Protests entered their tenth day in Iraq and grew deadlier on July 15. There were demonstrations across 9 provinces with several people being killed by the police, while more government and political party officers were occupied and destroyed.


For the first time, the Sairoon list had its headquarters in Hillah, Babil attacked. Sairoon is the alliance between Moqtada al-Sadr and the Iraqi Communist Party that joined together during the 2015 protest movement. Previously its offices had been spared until now.

Other parties and the local governments were targeted as well. In Nasiriya, Dhi Qar Hikma and Badr had its buildings burned, while the provincial council headquarters were surrounded prompting police to shoot at the crowds. People tried to burn the council building in Maysan’s Amara with the police killing three. A mayor’s house was set on fire as well in the governorate. Fadhila, Hikma, Badr and Dawa offices were burned in Samawah, Muthanna, the council building sacked, and three more died. This showed the widespread disillusionment with Iraq’s political class, and provincial authorities who have failed to follow through with their promises for the last several years.

The Karbala council attempted to escape this trap and threatened to take its power station off the national grid unless the people’s demands were answered.

Baghdad has been relatively quiet, but there was a march in Ur in the north, which was broken up by the security forces.

Basra is where this year’s demonstrations started, and has remained a center of activity. People have been outside the provincial council offices in Basra city for several days and took it over. That led the police to open fire on the crowd killing 4 and wounding 3. That raised the death toll to 15 since these disturbances began. There were also protests in the south where people tried to rush the gates outside the Zubayr oil field, which again resulted in gunfire and 5 people being hit, and at the Um Qasr port. Usually demonstrations are concentrated in the cities, but in Basra they have occurred all over the province from the cities to small towns. Since jobs have been a main demand people protests have focused upon economic targets such as the oil fields and the Um Qasr port.

Finally, there were marches in Najaf and Qadisiya, which were broken up by the security forces.

For the third time, Prime Minister Abadi talked about the potential threat the demonstrations posed. He claimed small groups were taking advantage of the events to attack government offices and destroy property. He promised that the security forces would go after them. With the unrest growing there is a greater and greater chance that the premier will order a widespread crackdown to put it down.

Al Forat, “URGENT The government: Groups within demonstrations behind sabotage and our forces will take preventative measures against them,” 7/15/18

Al Ghad Press, “165 injured in the Samawa protests and burning party offices in the province,” 7/15/18

Sky News Arabic-Now, “Three demonstrators were killed and 160 wounded in clashes with security forces in the southern Iraqi city of Samawah,” 7/15/18

Sotaliraq, “Government cut electricity share from Ninewa and sent it towards “angry” provinces,” 7/15/18
- “Prohibition on roaming in Muthanna province and wounded in an attack on the headquarters of Sairoon,” 7/15/18

Al Sumaria, “Karbala Council approves the demands of the demonstrators and threatens to separate power station from system,” 7/15/18
- “Maysan: The burning of a mosque and the house of the mayor of Qaimmakam and injuring 23 people,” 7/15/18
- “Security forces disperse a demonstration in the districut of Ur north Baghdad,” 7/15/18