Review The Foreigner’s Gift, The Americans, the Arabs, and the Iraqis in Iraq 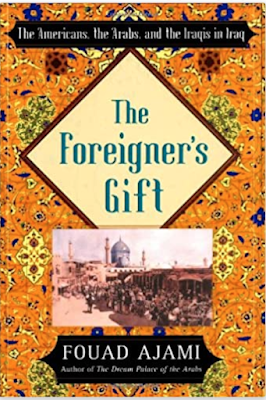 The Foreigner’s Gift reads like a journal of Fouad Ajami’s trips to Iraq but it’s really an argument for the war. Ajami acknowledges the great difficulties the Americans faced in the country but thought they would prevail for two reasons. First he believed in the universalism of democracy and thus with time Iraqis would take up the new political system. Second he brings up individuals he met as a panacea for all of Iraq’s problems. Thus almost everyone he met justified his belief in the invasion. There are some serious faults with this point of view.

Ajami’s book begins with his explanation for why the United States invaded Iraq. He said it was a fit of imperial rage but with a purpose. He writes that 9/11 was a huge humiliation and loss for America and it had to respond. Afghanistan wasn’t satisfying because it wasn’t an Arab country and the 9/11 hijackers and Al Qaeda were Arabs. He writes the U.S. couldn’t invade Saudi Arabia even though it had produced Osama bin Laden and most of the September terrorists because it was an ally. The Bush administration ended up choosing Iraq because so many officials considered it unfinished business from the Gulf War. Out of this thirst for revenge Ajami believed good would come because U.S. ideals would prevail and democracy would blossom. Ajami also thought the Arabs needed to be taught a lesson and shaken out of their conservative world view. This was a belief shared by the American elite and was why the majority of the political class initially backed the war. Ajami believed that the U.S. was a positive force in the world so it could invade any country and all the death and destruction was worthwhile. This was where the title came from. The gifts the U.S. brought were freedom and democracy at the point of a gun.

Next is Ajami’s technique for dealing with critics of the war. For every major issue that people had he found an individual who could solve it. If one was afraid of a theocracy being created like Iran’s Ajami brought up Ayatollah Ali al-Sistani who believed that clerics should only provide advice to the government and not rule like in Tehran. For those that questioned the right of exile parties to govern there was Ahmed Chalabi who was Western educated, came from a rich and well respected family, and who Ajami claimed had a natural affiliation for the people despite not having been in the country for over 40 years. There were major problems with drafting the constitution due to complaints by Sunnis but Ajami met the head of the Constitutional Commission Humam Hammoudi who he said was completely reasonable and good natured. For the Kurdish question there was Jalal Talabani who would become the new president and for security concerns there was General David Petraeus who was in charge of training the new Iraqi Security Forces. Ajami tried to say that with such a collection of outstanding personalities Iraq could persevere through the storm it was going through. The fact that Chalabi could hardly garner any votes in the elections or that Hammoudi wrote the constitution with just a small group within his committee and completely excluded the Sunnis is never mentioned because that would defeat the entire purpose of his book. Ajami was trying to rationalize the war not make it more complicated.

Ajami also dealt with Iraqi complaints about the U.S. occupation by blaming their culture. He said that too many Iraqis couldn’t thank the Americans for their gifts because of their “false pride.” They couldn’t acknowledge a foreign and western country had freed them because it meant they couldn’t do it themselves. He also wrote that Iraqis had too high expectations of what the U.S. could do which led to disappointment and criticism. This allowed Ajami to put blame on the Iraqis themselves. If Iraqis resented Americans it was ultimately their fault because of these views they had. Thus he could dismiss any Iraqi grievance he didn’t like.

Amongst all this Ajami does make some good points. One was that the Arab world never talked about the crimes of Saddam Hussein and valorized him many times like when he threatened Israel. It also ignored his constant failures like in the Iran-Iraq War or Gulf War. When the U.S. invaded Arab media and governments suddenly cared about Iraqis and laid down a constant barrage of reports about violence and casualties. Ajami railed against this as one of the core dysfunctions of the Middle East that was accepting of authoritarian rulers who oppressed their own people.

Fouad Ajami’s argument could be refuted when he released his book in 2006 and history has not been kind to him either. The U.S. invasion of Iraq did not spread democracy across the Middle East and there are many violations of democratic norms within Iraq itself such as the elite not believing that they should serve the people, the lack of checks and balances, the absence of rule of law, etc. There are many times when he gets caught up in his own beliefs or dismisses problems that it’s easy to see he was not writing about Iraq as he found it during his trips but as he wanted it to be. Things did not go his way.