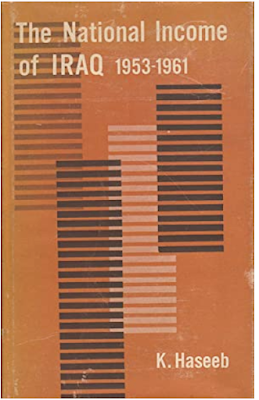 The National Income Of Iraq 1953-1961 is a statistical study of Iraq’s economy from the end of the monarchy to the start of the General Qasim government. The book is full of numbers and charts and spends a chapter on each sector of the economy explaining how the figures were determined. It makes for very dry reading that only in depth researchers would be interested in it.

The author K. Haseeb spent a huge amount of time coming up with his estimates. As Iraq was a developing country it lacked reliable statistics on the different parts of its economy. Haseeb sought extra data by going to business associations, using census data, and conducting interviews. He found that the net national income grew from 246 million dinars/£246 million in 1953 to 486 million dinars/£486 million by 1961. That averaged to a growth rate of 8.9% per year although that was not consistent year by year. Bad crops, increases in oil production or political events such as the Suez Crisis which cut off trade routes determined the annual averages. Despite all that the country had an impressive growth figure.

The national figures are the most important part of the book and are all at the beginning. The following chapters just repeat the process Haseeb used to determine the contribution of each part of the economy and become very repetitive.

There is no analysis or commentary about the economy. That was because the author was a statistician who wanted to quantify things not explain how they worked. Thus there was no mention of the underdevelopment of agriculture, the semi-feudal conditions on the land, the neglect of industry, etc. It is all statistics which makes The National Income of Iraq only for specialists.