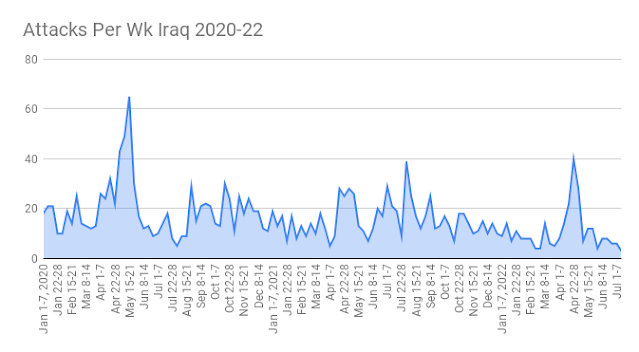 The second week of July 2022 might have been the quietest in terms of violence in Iraq since the 2003 invasion. There were only three security incidents total.

The Islamic State was responsible for the three attacks which took place in Baghdad (2) and Diyala (1).

Two soldiers in Baghdad were wounded as a result.

They happened when two checkpoints in the Tarmiya district in the north of the province were shot at by snipers. This is a longtime insurgent base which has occasional incidents every few weeks.

In Diyala rockets were fired at a Hashd camp in Mansuriya in the middle of the governorate. This was the one offensive operation of the week by the Islamic State.

The Islamic State is currently at its nadir. It was able to pull off its annual Ramadan offensive but has gone back to being dormant afterward. The last six weeks have seen incidents in single digits. As usual they are relegated to rural, mountain and desert regions where there are few people and thus have little impact upon the country.

NINA, "Two rockets fell in the vicinity of a camp for the Popular Mobilization in Diyala," 7/8/22

Al Sumaria, "A soldier was wounded by sniper fire north of Baghdad," 7/8/22