Malovany, Pesach, Wars of Modern Babylon, A History of the Iraqi Army from 1921 to 2003, Lexington: University Press of Kentucky, 2017 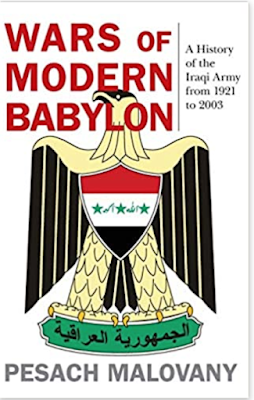 At 900 pages Wars of Modern Babylon, A History of the Iraqi Army from 1921 to 2003 by Pesach Malovany better be good. Unfortunately it’s not. Malovany was an Israeli intelligence official who mostly based his book upon Iraqi media reports. That gave Iraq’s perspective of its military engagements throughout its history. That’s missing from most accounts of the country. It came at a cost however as Malovany presented Iraqi propaganda with few comments. That supported Israel’s view of Iraq as a major threat. In the end, there are only two worthwhile parts. That means it’s not worthwhile to read such a large book to get to those sections.

Half of Wars of Modern Babylon is on the Iran-Iraq War and highlights all the issues with the writing. Iraq is presented as the superior military power due to its leadership, strategy and tactics. Since Iran was on the offensive for the majority of the conflict Malovany usually starts with an Iranian attack and then everything else is about what the Iraqis did. This is where all the Iraqi propaganda is repeated with the Iraqis usually stopping the Iranians or coming out victorious. It gets so many events wrong as a result. For instance, on the opening day of the war Iraq tried to destroy the Iranian air force on the ground with a surprise attack. The book says that the opening salvo was a success and the next day when Iran launched its own air operation it lost 67 planes. In reality the Iraqis did little damage because they lacked the right equipment and training, and only 7 Iranian planes were shot down the next day. Another time the author writes that Iraq’s attacks upon Iran’s oil infrastructure and oil trade was highly effective. He says Iraq quickly controlled the skies, caused heavy damage to Kharg Island Iran’s main export facility and sunk hundreds of ships. Other books found that the Iraqis often fled as soon as Iranian jets appeared because they were superior aircraft, fired missiles at ships from the longest range possible, left and then claimed that they hit or sunk a ship without confirmation. They also didn’t do much damage to Kharg Island until the end of the war and then shifted to other targets allowing the Iranians to repair its infrastructure. Because Malovany mostly used Iraqi sources he presents their position on the war which is important because Iraq under Saddam was a totalitarian state and largely impenetrable to outsiders. However the lack of analysis, criticism or correction of Iraqi claims leaves a gaping hole. That’s absolutely no reason to believe the Baathist state’s version of the war. However that does perhaps point to Malovany’s bias which was to present Iraq as a military threat which was the point of view of the Israeli government which he once worked for.

There’s another striking example of this when the book claims United Nations weapons inspectors and the U.S. led coalition weren’t able to force Iraq to destroy its weapons of mass destruction in the 1990s. Then Malovany writes that he didn’t know what happened to them after the 2003 invasion. Iraq did destroy its WMD in the 1990s. Why would the author write this? Again, it presents Iraq as a dangerous country.

One of the only good parts of the book is its coverage of Saddam’s decision making during the 2003 invasion. Saddam never believed that the war would happen and when it did he got intelligence from Russia that the main U.S. attack would come from Jordan. He thus ordered the Republican Guard to shift from the south where it was fighting the Americans to the west leaving the way to Baghdad nearly open. The war ended much faster than it might have. There’s a good breakdown of Saddam’s views and the leadership meetings that decided how Iraq conducted the war. Some of this material has been covered in other books but this is the best and most detailed one I’ve read.

Overall, there’s little reason to spend the time and money on this book. If Pesach Malovany had presented the Iraqi view of its various wars and then given a critique of it this book would have been so much better. Instead it appears to have been written with an agenda to repeat Iraq’s claims of its military prowess to prove that it was a threat to the Middle East. You don’t want to read 900 pages to figure that out.