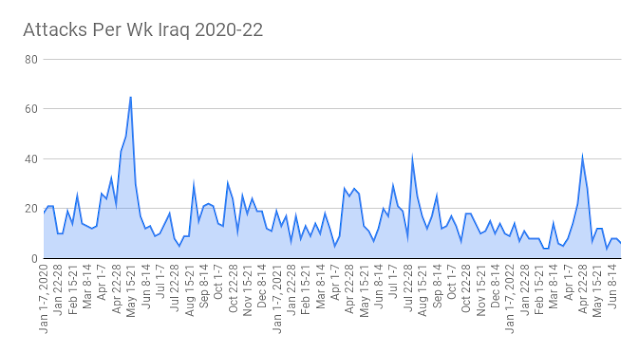 Security remained stable for another week. Pro-Iran groups did pick up their operations but it didn’t change the overall number of security incidents much. More importantly June is almost over and the Islamic State has not begun its annual summer offensive.

There were a total of 12 security incidents in Iraq reported in the media from June 22-28. There were 10 the 3rd week of the month, 12 the second and 6 the first. 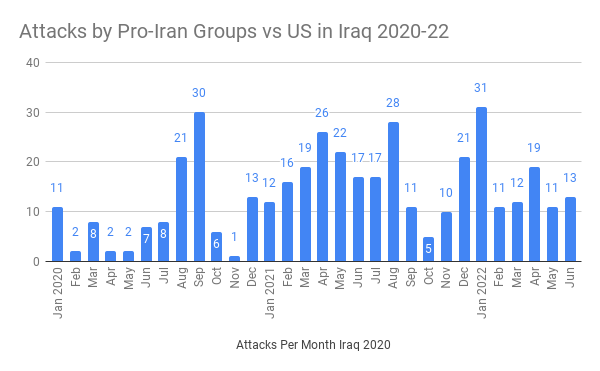 Pro-Iran parties carried out 6 attacks. A convoy working for the U.S. was bombed in Basra. Their main focus however was rocket attacks. There were two in Ninewa, one aimed at a Turkish military base that has been struck almost every week for the last few months. The Khor Mor gas field in Sulaymaniya was hit three times causing two wounded. This was political violence as factions wanted to warn the Patriotic Union of Kurdistan which runs Sulaymaniya to stand with the Coordination Framework when the next government is formed. The Framework contains many Hashd groups responsible for these attacks.

There were 6 incidents by the Islamic State. Those happened in Anbar (1), Babil (2), Diyala (1), Ninewa (1) and Salahaddin (1). They led to 1 dead and 12 wounded. One member of the security forces was killed, while 5 others were injured along with 6 Hashd and 1 civilian.

The previous two weeks there were 8 incidents each by IS and 5 the first week of the month. For 15 of the 24 weeks since the start of the year IS has only carried out attacks in single digits.

The types of attacks the insurgency carried out remained relatively the same and in the same types of locations. Anbar saw an IED which killed a soldier and wounded another. There were two incidents in Babil’s Jurf al-Sakhr district, a sniper and an IED, leading to 6 Hashd being wounded. A checkpoint was attacked in northwest Diyala injuring a policeman. An army unit got into a gun battle with militants in Salahaddin that wounded 3 soldiers. The last was the only offensive operation during the week. As usual there were no incidents in a city with all violence taking place in rural areas of the country.

- "A woman was injured in an explosive device explosion southeast of Mosul," 6/25/22

- "No One Killed In Dana Gas Katyusha Attack - Kurdistan Counterterrorism," 6/22/22

Shafaq News, "Injuries to the Iraqi army as a result of an ISIS attack, north of Salahaddin," 6/22/22

Al Sumaria, "An explosive device explodes, killing a soldier and wounding another in Anbar," 6/23/22