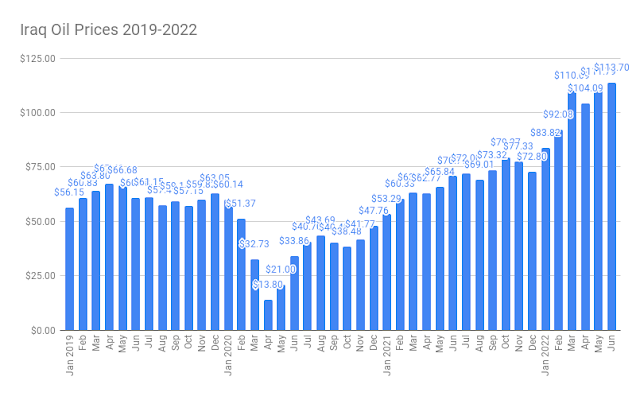 Iraq continues to benefit from the disruption in the energy market caused by the war in Ukraine. That led to record profits in June. As the most oil dependent country in the world this should be good news but the country is hamstrung by the lack of a new government and budget.

Before Iraq’s sales were constrained by an OPEC+ production quota but that has increased. The nation hasn’t been able to take advantage of that however because of its poor infrastructure. As Iraq Oil Report noted the pipelines in Basra which carry the majority of its petroleum to market are leaking and in need of repair. That means its production can’t go up by much because the pipes can’t handle it. This is a problem that has plagued Iraq for years and been a major constraint upon its oil industry.

Baghdad isn’t able to spend this wealth however because it lacks a new government. It’s been nine months since elections but the ruling parties are no closer to picking a prime minister. In June an emergency spending bill was passed for $17 billion but there is a lot more in the coffers. Without a new government a budget can’t be passed and these oil funds spent.