Review Republican ‘Iraq, A Study in ‘Iraqi Politics since the Revolution of 1958 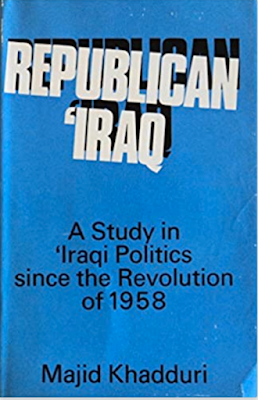 Majid Khadduri was one of the first prominent Iraqi historians writing in English. He was born in Iraq and then came to work at Johns Hopkins University. Starting with his 1960 Independent Iraq he published books on the country covering the monarchy up to the Gulf War. His early histories were indispensable because he had access to many of the people involved in events. Republican ‘Iraq, A Study in ‘Iraqi Politics since the Revolution of 1958 covers the “revolutionary regimes” of General Qasim, the Baath and the Arif brothers that ruled from 1958 to 1968. Khadduri’s thesis was that the military stepped into politics to overthrow the old regime and created an autocratic form of government.

The first half of the book is about General Qasim who took power after a coup in 1958. Khadduri is insightful as to the causes of the coup. The old regime had refused to share power with the younger generation. They had arisen after World War II and were made up of intellectuals, professionals, civil servants and army officers mostly from poor and lower middle class backgrounds. They were largely Western educated and wanted a Western liberal system of government. They believed that the ruling elite were corrupt and unwilling to change. The political system completely shut the young out which led to people to turn to violence as the only alternative which culminated in the 1958 coup. One of Khadduri’s goals was to explain the social background of the new political class in Iraq. He did a thorough job delving into where they came from and what shaped their worldview.

Qasim also came into office saying that Iraq would be a republic and a democratic government would be formed, but never gave up the reins of power. He thought only he could rule and became an autocrat as a result never ceding any authority to civilians or political parties. That was part of Khadduri’s argument that these army officers who took power after 1958 were ultimately undemocratic.

The second half of Republican ‘Iraq is about the Baath-Arif brothers regime. The pan-Arab Baath and military overthrew Qasim in 1963. They claimed they were taking up the ideals of the 1958 revolution. Their problem was they had no real program and the Baath were split into three groups that vied for power and allowed the military to expel them from government. Colonel Arif who had been co-leader of the 1958 coup then solidified power with the military being his base. He died in a helicopter crash and his brother took over. The Arifs talked about returning stability and normality to Iraq after the coups and even thought about turning over power to civilians but ultimately the military would have none of it. The Arifs thus became the new autocrats. As Khadduri noted the trend is when the military moves into politics it rarely leaves and that was the case with Iraq.

Despite being released in 1969 Republican ‘Iraq is still an important history of the country to read. It is full of details many of which were provided by the actual participants. Khadduri’s later books dramatically feel off in quality as he became a supporter of the Baath but this release was before he developed that bias. Many historians continue to cite his work showing his lasting impact upon the field.