The insurgency in Iraq remains at its lowest level since 2003. Attacks by the Islamic State remained in single digits while there were only a few incidents by pro-Iran groups.

There were a total of 11 security incidents in Iraq reported in the media from July 15-21. 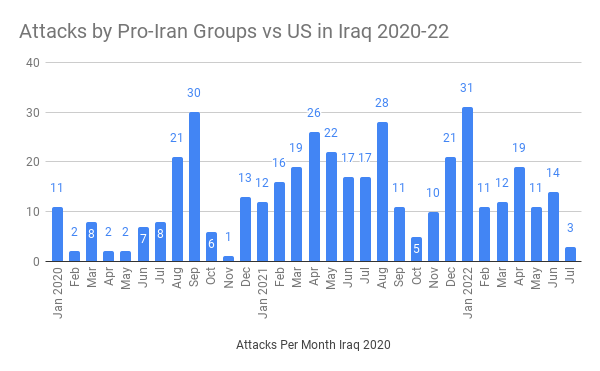 Two convoys working for the U.S. were bombed by pro-Iran groups in Salahaddin. These were only the second and third attacks by these factions in July.

There were 9 incidents by the Islamic State. Those occurred in Babil (1), Baghdad (1), Diyala (4), Ninewa (1), and Salahaddin (2). Attacks by IS have been in single digits for 7 weeks now. Since the start of the year 18 of the 27 weeks have seen single digit attacks by the group.

They resulted in a relatively high number of casualties compared to previous weeks. 14 people were killed consisting of 4 civilians and 10 members of the Iraqi Security Forces (ISF). Another 16 were wounded, 2 Hashd al-Shaabi, 6 civilians and 8 ISF. There were 15 casualties in Salahaddin 11 in Diyala, and two each in Babil and Ninewa.

An IED went off on some Hashd in Babil’s Jurf al-Nasr leaving two wounded. The district is a large Kataib Hezbollah base and a target of opportunity for the Islamic State.

A suicide bomber was killed by the security forces in Tarmiya in north Baghdad province. This is a long-time insurgent base. If there are incidents in the capital governorate they usually occur here.

There were four incidents in Diyala, an IED and three shootings. Three of those attacks happened in the center of the province and the fourth was in Khanaqin in the northeast. These are the main IS areas in Iraq.

IS attacked an army base outside of Mosul killing one soldier and wounding another. This was the second offensive operation of the week. Direct attacks on the security forces like this are rare these days.

There were two shootings in Salahaddin. One targeted a checkpoint and killed 6 police and wounded 7 more.

Two of the seven incidents during the week were offensive. All were in rural areas of the country. This is the present pattern of Islamic State activity over the last year or two. It is attempting to protect its main operating areas like in Diyala. It rarely attacks government forces outside of those regions and is almost completely absent from Iraq’s cities.

NINA, "A Convoy Of Logistical Support For The Int'l Coalition Forces Targeted With An IED, South of Salah al-Din," 7/19/22

- "A Convoy Of Logistical Support For The Int'l Coalition Targeted With An IED, South Of Salah al-Din," 7/21/22

- "Three brothers and two children were killed in the Mansouriya attack in Diyala," 7/21/22

Al Sumaria, "Two members of the crowd were injured in a bomb explosion in Jurf al-Nasr," 7/21/22