Violence in Iraq hit a new low in June 2022. The number of incidents by the Islamic State were the lowest for any month since 2003. The militants show no sign of starting their annual summer offensive either. Pro-Iran groups did slightly increase their operations.

There were a total of 40 security incidents reported in June. There were 73 in May. The previous low for a month was 42 in February. 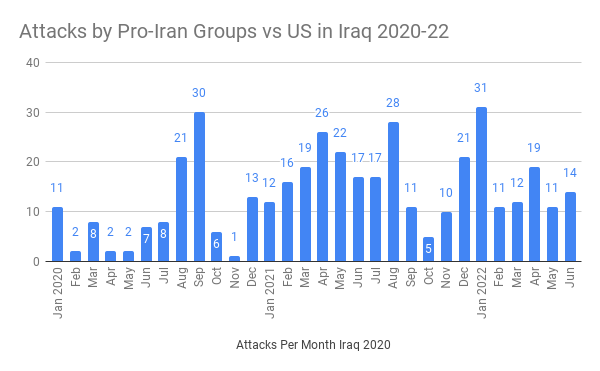 Pro-Iran groups were responsible for 14 incidents during June. There was a greater emphasis upon rockets than previous months which had more IEDs on convoys working for the U.S. There were 8 rocket incidents in June. 3 of those were aimed at the Khor Mor natural gas field in Sulaymaniya which was aimed at intimidating the Patriotic Union of Kurdistan during government formation talks. This new trend started in May. Using missiles allows these factions to hit a greater range of targets. These attacks also resulted in 5 wounded.

There were just 26 incidents by the Islamic State. That passed February’s 28 as the fewest attacks in a month since 2003.

Those resulted in 7 dead and 28 wounded. 3 members of the security forces (ISF) and 4 civilians were killed along with 6 Hashd al-Shaabi, 10 civilians and 12 ISF being injured.

An analysis of the types and locations of these incidents show the continued decline of the Islamic State. Of the 26 incidents in June only two were offensive in nature. None of them took place in a city. All were in rural and mountainous regions of the country where there are few people and even less government presence. That means the insurgency is barely impacting the population anymore. It can continue for years more in these remote areas but it has largely lost its relevancy.